I regret to report that last night’s Film Society of Lincoln center showing of Ken Russell‘s The Devils — a kickoff of a seven day, nine-film Russell tribute — was a disappointment in some respects. Russell attended with Devils costar Vanessa Redgrave, and it was of course delightful to see them sitting together, and to share in the love. But they showed the wrong version of this 1971 classic, the print was less than mint, projection was substandard, and a befogged Russell offered no hard answers about the Devils controversy. 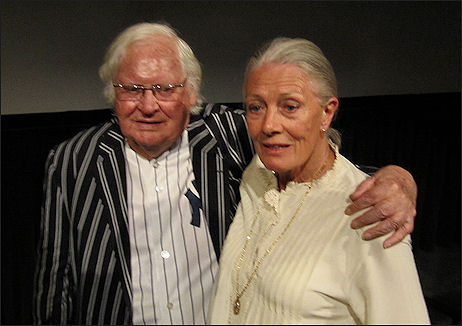 I’m not faulting the 83 year-old Russell for not being a younger man, God knows. What matters is that he’s attending each and every FSLC screening and “making the effort” and so on. But the fact of the matter is that Russell wasn’t very snap-crackle-pop when asked about this and that.

The Devils print looked vaguely cruddy — poorly aligned, underlit, green scratches here and there — and was not the promised 111-minute “rape of Christ” version but the 108-minute version that was originally released in the U.S. This was a massive letdown. FSLC had promised the notorious version, and I’m sure I wasn’t the only one in the room who felt burned.

I asked series programmer (and Film Comment editor) Gavin Smith what had gone wrong, and he said it had something to do with Warner Bros. not “allowing” the unrated print (which is sitting in England) into the country due to some legal blah-dee-blah. I’m still not clear on this. A FSLC screening sells tickets, of course, but isn’t a “commercial” screening as much as a museum-type showing. Will Warner Bros. ever stop messing with this film?

In a post-screening q & a Russell offered no inside explanation as to why Warner Bros. has twice offered and then withdrawn The Devils from commercial release over the last two years. (I wasn’t persuaded that he knew the particulars about the DVD and the iTunes versions being yanked after being announced and/or offered.) All he said was that “they don’t want it shown,” and something about their obstructions more or less constituting the same kind of political repression that is depicted in the film. The whole Warner Bros. thing is just infuriating, I swear. 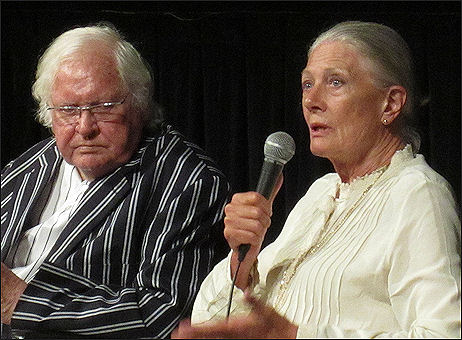 When I say “poorly aligned” I mean that the image projected last night was too large for the screen — that the “throw” was miscalculated — resulting in a significant amount of the film’s image being cropped by the projector’s aperture plate. Throw in the poor lighting and the green scratch marks and it was indisputably a substandard experience. I love film as much as the next guy, but the iTunes version of the The Devils that I rented for my iPhone? Perfect, brightly lit, immaculate.

I asked Russell after the q & a why Song of Summer, the 1968 BBC film that he considers his all-time career best, wasn’t being shown in the series, and he just looked at the floor. (Maybe he didn’t hear me clearly.) When I asked Smith about this he didn’t seem aware that Russell has called Song of Summer “the best film I have ever done.” My impression is that the FSLC never gave the idea of showing this film much thought.