Michael Douglas realized fairly quickly, of course, that he sounded a little fruit-loopy when he told The Guardian‘s Xan Brooks that his bout with throat cancer was largely due to giving head to his wife, Catherine Zeta Jones. People were chortling and wondering what Douglas’s deal was. It seemed to me like a fairly ridiculous thing to say. And remember that Douglas also said that giving more head cures the cancer you got from giving head in the first place….what? 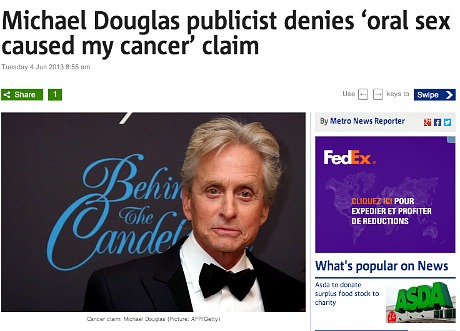 And so Douglas, naturally wanting to advance the notion that he’s level-headed and not some kind of flake, told his publicist, Allen Burry, to deny that he said that muff-diving was the cause of his own cancer. “In a discussion with the newspaper,” Burry told the AP, “they talked about the causes of oral cancer, one of which was oral sex, which is noted and has been known for a while now.”

“The Guardian firmly denies this charge of misrepresentation,” the paper responded yesterday. “Mr. Burry was not present at the Guardian‘s interview with Michael Douglas; the only two people present were Mr. Douglas and the Guardian writer, Xan Brooks. Here’s the audio file of the relevant part of the interview, along with a verbatim transcript of that section.

Older guys tend to give more head as it takes the pressure off them to maintain a stiffy come hell or high water. Plus their wives/girlfriends are always happy to receive as long the the older guy knows what he’s doing. The best way to travel is to do the old bone-a-roony a little bit and then go out and smoke a cigarette and then come back and give some vigorous but serene lungah-lungah-lungah-lung, and then go outside and contemplate the moon or something and then come back in and play hide-the-salami a bit more, etc. But you want to be careful not to agitate your wife/girlfriend lest she say, “Hey, what’s the matter with you? You’re screwin’ just like a Chinaman!” Or “whatever you do, don’t sell that cow!”