Is there any overlap between the folks who saw The DaVinci Code and are planning to see Angels and Demons (Sony, 5.15), and the ones who’ve seen or recently rented Bill Maher‘s Religulous and have maybe begun to consider or even accept his rational humanist views? The answer, I’m fairly sure, is somewhere between “very little” and “next to none.” And that, in a nutshell, is why things are as screwed up as they are right now. 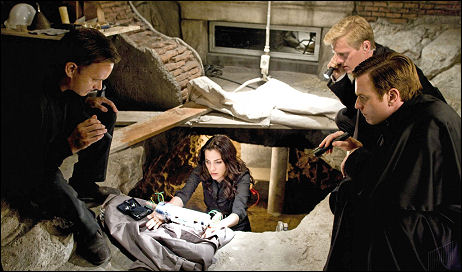 Because as heartening as Barack Obama‘s election seemed to a huge number of us, it didn’t change the fundamental reality of where the vast majority of world citizens (i.e., the insufficiently educated, the flat-out ignorant) live in their heads. The intimidated and spooky-superstitious view of life still rules, and the Catholic Church (along with Islam) is one of the principal beneficiaries. You could also conclude, given this fact, that Ron Howard, Brian Grazer and Tom Hanks aren’t doing too badly either.

I know that if by clapping my hands three times I could (a) convert the world over to Bill Maher’s side of the issue and (b) eliminate the feelings of allegiance and submission that people offer daily to the Catholic church, I would clap my hands three times.

I get how religious orders and traditions that seemed to radiate some kind of divine aura when we were kids can continue to offer a kind of vague but spooky comfort to adults, even those that don’t believe in religious dogma. Moral order and moral discipline are essential for the survival of any civilized society, but the humanist basics — a belief in calm and decency and charity and kindness, and a respect for all tribes, beliefs, creeds and traditions that tend to their own and don’t advocate hate or cruelty or suppression of thought — weren’t invented by the Catholics, and in fact have been undermined by them in some cases.

It would be heavenly — I’m using this word deliberately — if people would just wake up and breathe in the good air and stand tall on their own, and in so doing pull the plug on the Catholic church now and forever. 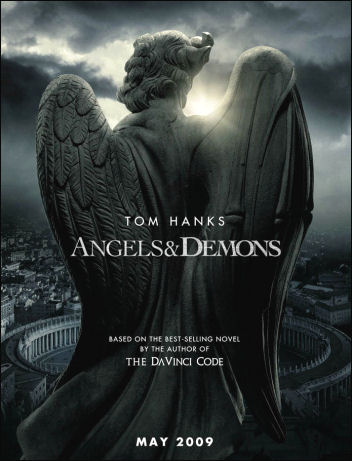 That said, there’s nothing quite so dispiriting in the world of motion pictures as that glum and dutiful expression that Ewan MacGregor wears when he’s playing a character who’s part of a solemn order. He’s wearing this expression in every clip on the most recent Angels and Demons trailer.

We all know what this movie will be. The clips make it obvious. And we all understand it’ll clean up like the first one did. The question is why didn’t the trailer cutters include a line or even a word from poor Ayelet Zurer, the 39 year-old Israeli actress who plays Tom Hanks‘ “wing woman” (as Empire put it last week)?

Dan Brown‘s Angels & Demons is about a threat from the Illuminati, one of the Vatican’s ancient adversaries that still lives today in one form or another. Hank’s ‘symbologist’ Robert Langdon is hired by the Catholic higher-ups (including MacGregor’s character) to sift through the clues left by The Illuminati to find the “ticking time-bomb” they’ve planted under Rome.

The Illiuminati “have been dedicated since the time of Galileo to promoting the interests of science and condemning the blind faith of Catholicism,” the copy says. Sounds like a plan.