Last night I attended a NY Times “Times Talk” interview with Times critic Jason Zinoman interviewing Somewhere director Sofia Coppola and star Stephen Dorff. No photos or recording were allowed, but my own interview with Coppola (which happened three days ago at the Standard) was just as good. 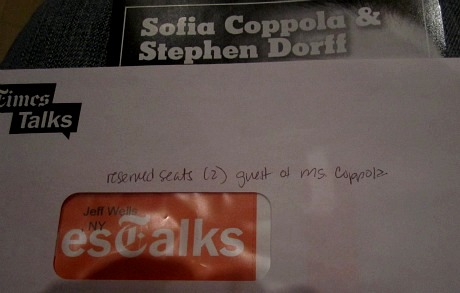 I needed earphones to hear this on my Windows Toshiba laptop, but it sounds nice and robust on the iMac.

“I think it’s refreshing for an audience to get to breathe and not feel bombarded,” Coppola said about her film, “and to feel a kind of quiet…not have the same thing all the time. A lot of people tell me they think about it a lot after they’ve seen it, [that] it stays with them.”

Our conversation was all over the map, but it was relaxed and enjoyable, I felt. I chose not to prod or invade with heavy questions. It felt better to just glide through the clouds. “I’m not one of those early morning writers…I’m not a morning person,” she said at one point. “We have a place in Paris [but] my boyfriend’s band, Pheonix, has been on tour in the US, [and] I like being in New York. I always want to do something else [after doing a certain kind of film] but I’m not sure what….but I like doing a film the small way with a small crew. I try to do that, [make a film] every couple of years. I’m usually working on it. I’ll take a little pause to regroup or whatever.”