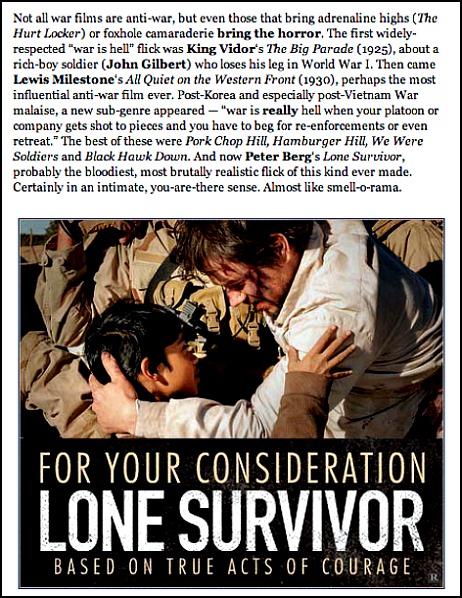 Not all war films are anti-war, but even those that bring adrenaline highs (The Hurt Locker) or foxhole camaraderie bring the horror. The first widely-respected “war is hell” flick was King Vidor‘s The Big Parade (1925), about a rich-boy soldier (John Gilbert) who loses his leg in World War I. Then came Lewis Milestone‘s All Quiet on the Western Front (1930), perhaps the most influential anti-war film ever. Post-Korea and especially post-Vietnam War malaise, a new sub-genre appeared — “war is really hell when your platoon or company gets shot to pieces and you have to beg for re-enforcements or even retreat.” The best of these were Pork Chop Hill, Hamburger Hill, We Were Soldiers and Black Hawk Down. And now Peter Berg‘s Lone Survivor, probably the bloodiest, most brutally realistic flick of this kind ever made. Certainly in an intimate, you-are-there sense. Almost like smell-o-rama.

What is the value? Lone Survivor tells the ghastly, arduous truth, or at least reaches like hell for a version of it. A version, at least, that has passed muster with actual “lone survivor” Marcus Luttrell, who’s portrayed by producer-star Mark Wahlberg. That should do it for the rest of us. The whys and wherefores are in flux, but truth is non-negotiable.

Based on Luttrell‘s “Lone Survivor: The Eyewitness Account of Operation Redwing and the Lost Heroes of SEAL Team 10,“ Lone Survivor is an account of a horrific real-life operation that happened in Afghanistan eight years ago. Saluting this film during award season is, I suppose, some way of giving it up for the nearly 2300 U.S. soldiers who’ve died over there. Even with the knowledge that the 12-year-old Afghanistan conflict has accomplished little except as a symbolic, extremely expensive pushback against the U.S.-hating Islamic radicals.

War is “a surreal, exhilarating nightmare,” I wrote in my initial reaction, and the best movies about war always pass along a semblance of this. A semblance by way of shadows, echoes, ghosts. I only know that Lone Survivor throttles you all to hell. I had a “good effing God!” look on my face (I wasn’t holding a mirror but trust me) for at least half of the two-hour running time. The two thoughts I had were “God help the guys who went through this nightmare” and “thank God I’m sitting warm and safe and dry in a theatre in Burbank.”

Lone Survivor “accomplishes everything it wants to achieve,” wrote Hollywood Reporter critic Todd McCarthy. “It drops the viewer right in with the SEALs, makes you admire their toughness, bravery and abilities, and puts you through the wringer. It also makes you realize that, if they’re forced to make a tough decision, it might not be the right one. When Luttrell’s three colleagues eventually succumb to their innumerable wounds and a rescue chopper carrying eight more SEALs and eight Army soldiers is shot down by the Taliban, making for 19 American fatalities in all, the specter of tragedy and senseless loss suffuses everything and is repeated again at the end when photographs of the real-life soldiers and their loved ones parade by one by one.”

Is Lone Survivor an awards-season contender? Hell, yes. The honest gut-punch aspect plus the high level of craft and unmissable emotion demand this level of consideration. 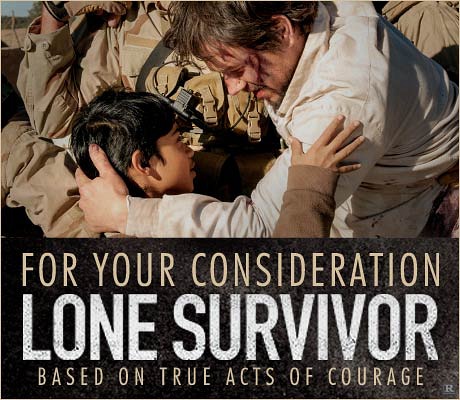 Note: This is the first in a series of HE Sink-In Advertorials. I chose the films that I feel a special admiration for or connection with, and then went to the distributors to partner up. It would be one thing if they came to me first, but they didn’t — this is my action. The advertorial will stay on top for 48 hours (or until midnight on Wednesday, 12.11). New stories will appear below it.