There’s a brief segment in Woody Allen‘s Husbands and Wives in which Allen’s character reads a short story about a champagne-sipping womanizer envying the married guy who lives down the hallway, and vice versa. David Dobkin‘s The Change-Up is a feature-length riff on this idea, goaded by a supernatural premise. 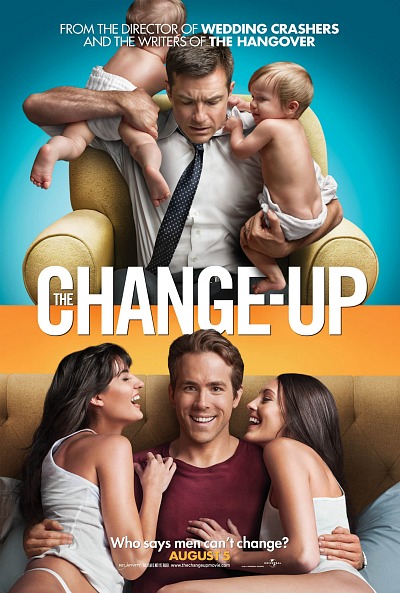 I used to ask myself if Ryan Reynolds will ever topline a really well-made commercial mainstream movie. Not a pretty good one like The Proposal or an interesting but unsatisfying indie-exercise pic like Buried, but a sharp, snappy, laugh-out-loud exception on the level of Dobkin’s The Wedding Crashers. Will it ever happen?

Jason Bateman costars in The Change-Up along with Leslie Mann, Olivia Wilde and Alan Arkin. The screenplay is by Jon Lucas & Scott Moore (The Hangover…ih-oh) and producer Neal Moritz (Fast & Furious, Click)….beware of Moritz! The film’s scheduled 8.5 opening could be another slight uh-oh…or not.