Set in what appears to be a smallish, economically stagnant city in western Massachucetts (the film was shot in Newburgh, New York), 11:55 uses a standard drug-dealing revenge scenario, which Lord knows are common enough in Chicago and other cities plagued by gang violence. So there’s your current.

It’s basically about a just-returned Iraq War veteran (Victor Almanzar) facing up to his past as a drug-trade enforcer. He wants to go straight and live clean with his girlfriend (Shirley Rumierk), but he killed a hothead asshole before serving in Iraq and now, we’re told, the asshole’s brother (Mike Carlsen) is heading into town on a bus (arriving at 11:55 pm) to even the score, and he’s got two bad hombres waiting at the bus depot to back him up.

Like High Noon, 11:55 is basically about how Almanzar will meet this threat, and how everyone he turns to for help is either too young, old, weak, selfish or cowardly. 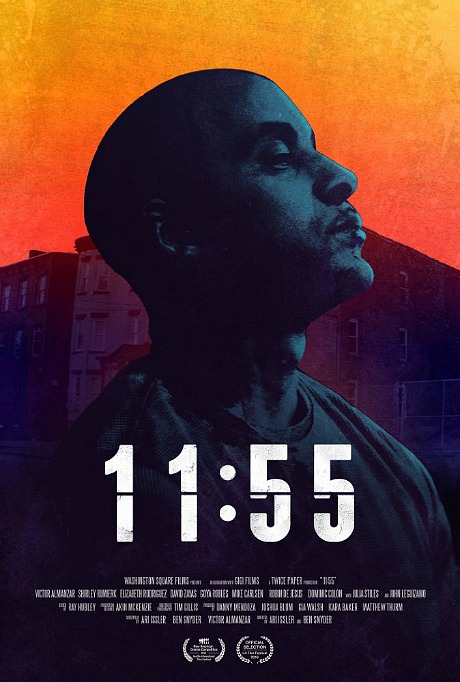 A paraplegic Iraq War buddy (John Leguizamo) has his back but what he’s gonna do from a wheelchair? Almanzar’s girlfriend (the Grace Kelly figure) disapproves of violence in general and urges him to run for it. A foolish ally (i.e., Lloyd Bridges‘ character, played here by Goya Robles) deserts him for petty reasons. A tough-talking sister (i.e., the Katy Jurado figure, played by Elizabeth Rodriguez) despises the weakness among his friends but nonetheless plans to lam it for her own safety.

At the end of the day Almanzar is facing the same tough odds that Gary Cooper faced at the end of High Noon — he has to handle it all on his own.

Both films say that people are generally no damn good, but there’s a difference between the citizens of a small town in the 1880s refusing to help a good-guy sheriff who’s gotten rid of the bad guys and made the town safe for women and children and the friends of an Iraq War veteran with a checkered past saying “sorry, homey…this is your fight…we got no skin in this.”

I nonetheless believed — accepted — the 11:55 scheme and story. The street-eloquent script (co-penned by Almanzar and Issler), the nicely sculpted characters, the fully believable performances…all are fine. But I couldn’t stop noting the way Issler and Snyder have re-staged and re-performed several well-known moments from High Noon. It was kind of fun, this game, but each time I noticed an echo or tribute I was reminded of what 11:55 basically is.

The best, balls-out performance in 11:55, by the way, is given by Julia Styles. It’s a one-scene cameo in which she rants and raves at her husband (i.e., the avenging-brother-of-the-dead-asshole who’s on his way to kill Almanzar) about what a dick he is, and why doesn’t he ever shine some kind of light on things instead of adding to the darkness.

** Brigade Marketing, which is promoting 11:55, disagrees with the notion that the film is a modern-day High Noon remake. Last night a Brigade rep sent me the following statement: “11:55 is an original work of fiction based on contemporary real world events. It is not a remake of High Noon and is not associated with High Noon in any way.”

June 5, 2016by Jeffrey Wells7 Comments
« Previous post
If Only Fox Would Circulate This Poster All Over
Next post »
Wanna See, Don’t Wanna See