Imagine that two years ago director Steven Spielberg, screenwriter Tony Kushner and actor Daniel Day Lewis decided to make a film about the conflicted and largely failed presidency of Andrew Johnson instead of one about Abraham Lincoln‘s passage of the 13th Amendment. Johnson would have told the story of a decent and principled man who was in some ways his own worst enemy and who caught hell over the failures of post-Civil War Reconstruction, and who ended up being impeached by the House only to be acquitted by the Senate. 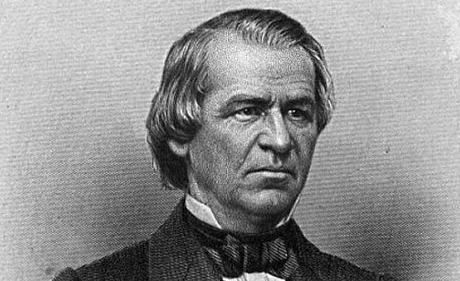 Imagine what the response would be if Spielberg had brought his very best game to the table and if Johnson had turned out to be just as good a film as Lincoln is — superbly acted by DDL, rich in period atmosphere, thoughtful, stirring, well-researched, great supporting performances, first-rate production values. You know that Johnson wouldn’t be as much as a hot Best Picture contender as Lincoln seems to be right now, and you know that people wouldn’t be saying “yeah, I guess you’re probably right — at the end of the day the Best Picture Oscar is probably going to be won by Johnson.”

And you know why, don’t you? Because the presidency of Andrew Johnson doesn’t stir us like Lincoln’s. Because we haven’t been taught since we were six or seven years old that Johnson was perhaps our greatest president ever. Because Andrew Johnson wasn’t assassinated. Because he isn’t on the five-dollar bill. Because Johnson’s contentious presidency is widely regarded as a muddled, frustrating thing, and marked by derision, discord and controversy.

I’m just making a mild, even-handed point about Lincoln, which is that deep down much if not most of the acclaim for Spielberg’s film is about our lifelong embrace of the legend of Abraham Lincoln. Is it a good film? Yes. Is it a very good film? You could argue this. But if Johnson was just as good as Lincoln and perhaps in some ways a little bit better (you can’t beat that Senate vote on impeachment for a third-act climax), you know it wouldn’t be the same thing. Be honest and ask yourself — how much of the Lincoln acclaim is really about the film itself and how much of it is about the worship of a great man and a great historical figure? You know what the answer is. You know it.