With the Ishtar Bluray finally out, it’s permissible to re-post a 33-month-old riff on the oppressively dull jacket art:

Sony Pictures Home Entertainment design guy: “So what about the Ishtar Bluray jacket art? I’ve roughed out some ideas.”

SPHE marketing director: “No ideas. Boilerplate. Use the art from the VHS. Tweak it or re-do the titles, but we’re not spending nickel one on re-design.” 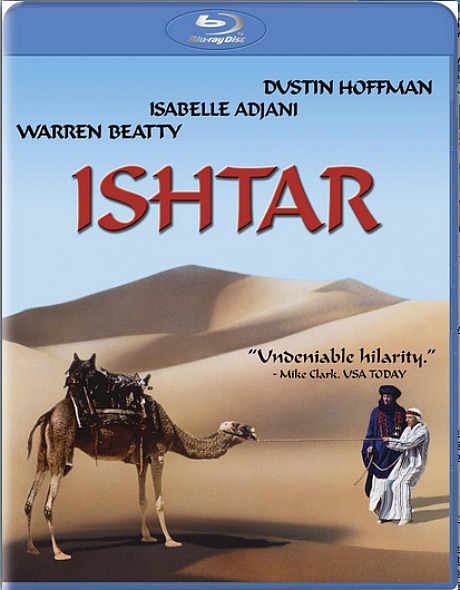 Design guy: “The VHS art…? But we’ve got all this material.”

Design guy: “What about a critic quote?”

Marketing director: “Use the Mike Clark one from 1987.”

Design guy: “Have you read the Richard Brody one?”

Marketing director: “The what?”

Marketing director: “Average people don’t want to hear from guys like that. Just keep it simple. ‘Undeniable hilarity.’ The dumbest person in the world gets that.”

Design guy: “But…whatever you want, I’ll do it, no worries. But they’re putting this movie out after not putting it out for all these years because it’s become a cult film, and Brody…”

Marketing director: “I don’t want to hear this.”

Design guy: “But they’re not putting this movie out because it’s just another comedy. It has a special kind of dry humor. It’s called no-laugh funny. And Brody is articulating the new view. He gets the new Ishtar coolness. So does Mark Olsen in this L.A. Times…”

Design guy: “He called it ‘one of the most original, audacious, and inventive movies — and funniest comedies — of modern times…it isn’t just a movie worth rescuing for a few choice bits…it’s a thoroughgoing, beginning-to-end masterwork.'”

Design guy: “We can cut it down. ‘One of the funniest, most original, audacious, and inventive movies of modern times.'”

Marketing guy: “Sounds intimidating. More like an art film than a comedy you can just laugh at. If I was just looking to just flop on the couch and chill out, I’d watch something else. Something stupid.”

Design guy: “But the people who want to watch Adam Sandler films will never watch Ishtar. That’s the point. It’s a cult film. That’s why they’re putting it out.”

Marketing director: “A cult film that maybe 800 or 900 people in the country will respond to by buying the Bluray. Big deal. The rest of the country just wants to have a good time. Use the VHS art and the Clark quote. Next?”