In yesterday’s “Ladykillers” piece I bypassed Meryl Streep/Julia Roberts as potential Best Actress contenders in John Wells‘ film version of August: Osage County. That’s due to the strong likelihood of this Harvey Weinstein/Jean Doumanian co-production being a 2012 release. But what would happen if the Osage County team got the lead out and opened their film 11 months hence? 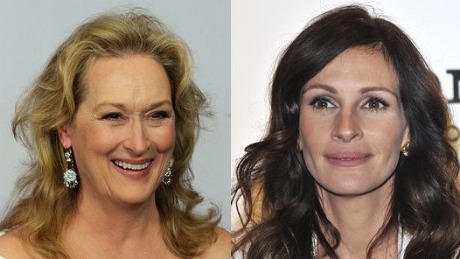 Meryl Streep vs. Julia Roberts in August: Osage County could become one of the greatest within-the-same-film female acting battles of all time.

I’ll tell you what happens: Streep wins the 2011 Best Actress Oscar in a walk. But the more likely finale is that she wins a year later, or when they hand out the 2012 Oscars in February 2013.

Osage County will reportedly begin filming next summer (presumably between May and August), or a month or two after Streep finishes portraying conservative British prime minister Margaret Thatcher in Phyllida Lloyd‘s The Iron Lady.

An extremely rushed post-production schedule would be required for August: Osage County to be released by next December, and urgency has never been an issue in preparing the screen version of Tracy Letts‘ Pulitzer Prize and Tony Award-winning play to begin with. If anything, the watchword has been “drag-ass” — the original Steppenwolf production opened three and half years ago and the film adaptation was decided upon in ’08. Letts, I’m told, has taken his sweet time writing the screenplay version, presumably due to pressures to translate his 210-minute play down to a more butt-friendly 150 or 160 minutes.

One further assumes that Streep wouldn’t want to be competing against herself with two Best Actress performances — Margaret Thatcher (which you know she’ll kill with, even if the film isn’t absolutely top-grade) vs. Violet Weston. And I can’t imagine that the producers of Iron Lady and August: Osage County would want an awards-season showdown.

But perhaps Meryl wouldn’t mind. If both films were to open this year there would be almost no choice but to hand her a second Best Actress Oscar (the first won in ’84 for Sophie’s Choice) and her third overall. The double-barrelled blitzkreig would be all but unstoppable. 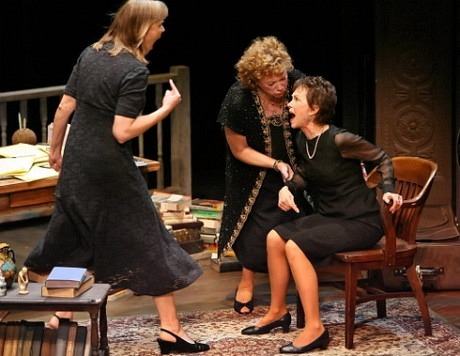 The more likely scenario is that Streep gets nominated for The Iron Lady but doesn’t win, but returns with guns blazing in August: Osage County. Given the snail’s pace so far, I’m expecting to see Wells’ film open sometime between September and December of 2012. If you know Violet Weston you know Streep will be nominated, trust me. And so will Roberts, I’m guessing, due to her having one hell of an angry, intestinal-fortitude, emotional-river role as Streep’s daughter, Barbara Fordham. But Streep wins, in part due to a 2011 overlap sentiment with voters thinking “well, she was so great as Thatcher and now she’s excellent again,” etc.

So Streep either picks up her Oscar in February 2012 (if both films open this year) or, more likely, February 2013. But one way or the other, she’s in. The perennial “Meryl again?” whine won’t make a dent.

The only possibly troublesome issue facing The Iron Lady and August: Osage County is whether their directors are up to snuff. Never forget that Lloyd, a theatre and opera director, made Mamma Mia! into a hugely successful but agonizingly awful film to sit through. And the fact is that Wells did such a fine job of conveying unemployment angst in Company Men that he made me feel like I was stuck in a minimum-security prison.

Iron Lady costar Jim Broadbent told Vulture‘s Kyle Buchanan in a 12.29.10 posting that the film will start shooting in London at the end of this month.

A further concern (or suspicion, if you will) about The Iron Lady is a decision by Lloyd and producer Damian Jones (The History Boys) to have female screenwriter Abi Morgan rewrite Brian Fillis’s screenplay, which dates back to ’07. I haven’t the first clue about the quality of anyone’s screenplay or writing, but hiring a screenwriter who’s described herself as an example of “Thatcher youth” suggests that Lloyd and Jones are looking to soften or at least emotionalize the portrayal.

Morgan (who also wrote the screenplay for Steve McQueen‘s forthcoming Shame) told a Scottish interviewer earlier this year that “I need to be in charge and that comes from when I was growing up and money was always an issue…I didn’t want to feel the fear of poverty again and I suppose in that way I qualify as Thatcher Youth.”