Mr. Magorium’s Wonder Emporium (20th Century Fox, 11.16), directed and written by the once-hot Zach Helm and costarring Dustin Hoffman and Natalie Portman, is a family film that most likely blows on some level. But I wasn’t sure how bad it was until I heard today that Fox publicists made it clear to critics (or at least one unnamed critic I spoke to) that they would physically block them from attending today’s 2 pm Denver Film Festival showing at the Ellie Caulkins Opera House. 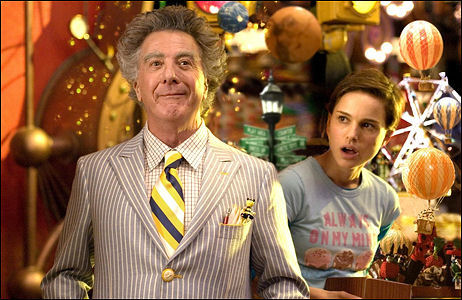 The ticket-buying public was free to attend the showing. There was an ad promoting it in a local Denver paper. But when this critic asked about attending the show, he was told “forget it” by the local Fox rep. But it’s a film festival open to the general public, he argued. Anything that shows at a film festival is fair game for critics — those are the rules. The Fox rep was adamant — no entry for critics. “Does that mean you’re actually going to physically block me for going in if I have a ticket?” the critic asked. Yes, the Fox rep said. We will physically block you.

When was it exactly that 20th Century Fox — big Fox, not Fox Searchlight — became a goon studio? It’s SOP for studios to blow off press screenings of mediocre movies before the opening, but strong-arm tactics are something new. What if the unnamed critic had worn a wig and a beard and slipped through and then was recognized by the Fox goons? Would they tackle him? Would they use tasers? “Noooo….don’t taser me! No…aaaahhhh!”

The critic told me that the Denver Film Festival reps “are nice people…they’re caught in the middle of this.” Maybe, but they’re not very responsive. I e-mailed Britta Erickson, the festival’s media & industry relations director, three or four hours ago and no reply.