Jason Bateman with a slight “eew” expression vs. Jennifer Aniston not responding to him or whatever’s in the cup but to Bateman’s hair. And right away you’re thinking, “What’s she seeing in his hair? Or is it…what, something crawling on the wall? Something’s not right here.” On 7.30 Real Time with Bill Maher writer Chris Kelly riffed on this and other aspects of the poster for The Switch (20th Century Fox, 8.20). 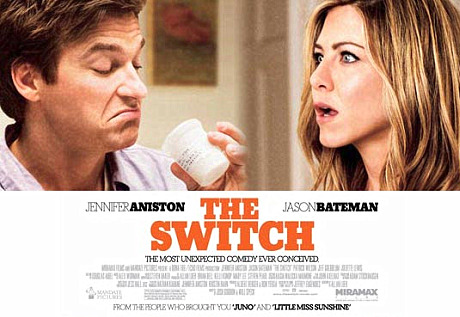 “What typeface do you want?”

“Oh, I don’t care, whatever you’ve got, as long as it doesn’t say comedy, or anything else about the movie.”

“Again, don’t care. This thing’s a dead loss. You got any pictures of Jennifer Aniston, but sort of busy and uninteresting, like a screen grab, so people will know this is one of those in-between Anistons with like Woody Harrelson, that goes straight to video?”

“Some guy from TV. Whatever picture you’ve got is fine. Just so long as their eyelines don’t match.”

“I don’t know. Maybe he thinks if it smells bad he’s got cancer. Who gives a shit. Just paste it in.”

“You got a lot of white space…”

“I’m just saying, you’ve got room for a tag line.”

“Okay… uh… from the people who brought you Juno and Little Miss Sunshine.”

“Yep. Thanks. This is a really nice Kinko’s.”