I missed Robert Budreau‘s Born To Be Blue during the Toronto Film Festival, and now I’ll be missing a special screening at downtown L.A.’s Regent theatre in a few days. Sorry. All you have to do is blink your eyes and you’re missing something these days. (A special New York screening is also planned.) The critically respected non-biopic (93% on Rotten Tomatoes, 66% on Metacritic) opens on Friday, 3.25. 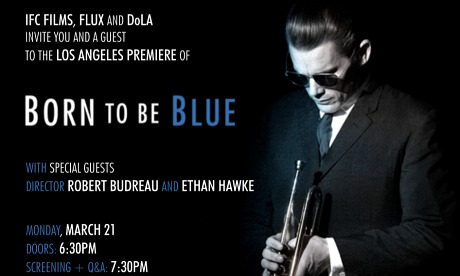 Posted a month ago: Andrew Barker’s 9.13.15 Variety review reads in part: “In a cinematic landscape awash with hairsplittingly literal musical biopics, it comes as a pleasant surprise to discover that Robert Budreau’s Chet Baker film, Born to Be Blue (IFC Films, 3.25), is not a Chet Baker biopic at all.

March 18, 2016by Jeffrey WellsNo Comments
« Previous post
Last Confirmation Plug Until Next One
Next post »
Red Is The Color