The Bourne Ultimatum (Universal, 8.3) looks like the one truly exceptional threequel due out this summer. (How can it be otherwise with Paul Greengrass directing?) But which of the other five will be the worst? I’m sure there are deeply-held opinions. 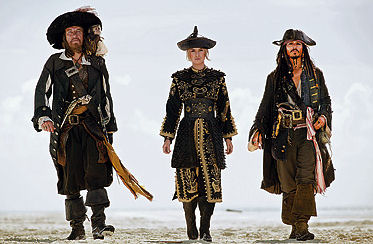 My money, naturally, is on Pirates of the Caribbean: At World’s End — another superdooferus Gore Verbinski wankbuster that’ll look terrific and will be about absolutely dead frickin’ nothing except the major participants getting richer. (Will a certain columnist who loved Dead Man’s Chest write after seeing this new one, “Ecstasy! My heart is fluttering with joy!”?) One comfort factor: the presumed return of Bill Nighy as Davy Jones.
Perhaps I shouldn’t underestimate the potential tediousness of Spider-Man 3, the trailer for which makes it look like the Spider-Man version The Empire Strikes Back, with Kirsten Dunst being the lead supplier of Yoda-like “beware of the dark side!” warnings.
Shrek the Third will be harmless. Ocean’s Thirteen — a Sting-like revenge-against- Andy Garcia story — may actually be half-decent. And Brett Ratner‘s Rush Hour 3 will almost certainly be glorious.
Time‘s Richard Corliss has written that “the trifecta of threequels is crucial to Hollywood’s health.” My first reaction to this was the opposite — they’re crucial to feeding the Hollywood disease. But if the big three Threequels are profitable enough, they’ll bring in the bucks that will help cover the shortfalls on artistic- gamble films like Children of Men and others….and that’s a good thing.