Originally posted on 3.13, re-posted for current NY and LA openings: Super is partly a dark and bracing satire of superhero movies, partly a withering “eff you” to T-shirted ComicCon culture dweebs who live for superhero fantasies, and partly a violent, surreal-ish Troma comedy. However you want to slice it, it is not selling the same old bilge about a lonely neurotic dork finding transcendence and salvation by adopting a super alter-identity and kicking criminal ass and getting the girl of his dreams, etc. 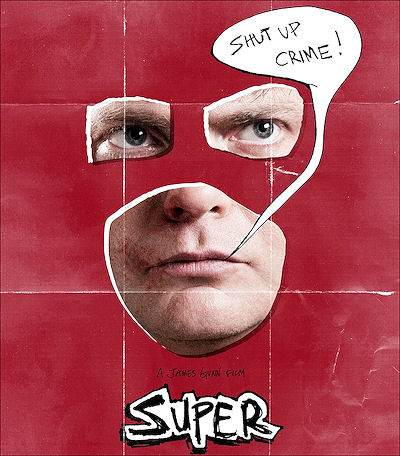 The fact that it’s dopey-funny in a dry and anarchic way doesn’t change the fact that Super is, deep down, a rather harsh and unsparing portrait of marginally sociopathic comic-book readers-and-dreamers (as represented by Rainn Wilson and Ellen Page‘s characters) who are so full of rage and caught up in absolutist fantasy themes that they can’t really process reality, and who hand out severe bloody beatings in an oddly giddy but mean-spirited way.

James Gunn‘s movie, which also delivers sincere-anguished-weeping and praying-to-God scenes, is really quite the original thing. By my standards Super is way, way better than Kick-Ass because the latter was made with an underlying affection for superhero movies & mythology while Super mostly feels contempt for it. It’s the closet approximation I’ve ever seen of my own view of superhero films and fans of same. I now have another fantasy to resort to apart from my dream of strafing the ComicCon faithful in San Diego in an F-14 Tomcat.

It’s about a glum short-order cook (Wilson) who decides to become a vigilante superhero called The Crimson Bolt after his unstable former-addict wife (Liv Tyler) succumbs to the temptations of a of a local drug dealer (Kevin Bacon). Wilson soon after partners with a hyper, semi-delusional comic-store clerk (Page) who dress up in yellow and green outfit and calls herself Boltie.

It never occurs to Wilson and Page that the kind of justice and punishment they mete out to lawbreakers and selfish ne’er do wells is just as bad and dangerous and socially threatening as anything that riled them up in the first place. When Wilson gets into fights he clubs his adversaries with a wrench, crunching skulls and splattering blood and sending them to intensive-care wards, and Page’s delight and ecstasy when she delivers similar-type woundings is both hilarious and appalling. She’s really quite the loony firecracker in this film — it’s a wicked, super-spirited, no-holds-barred performance.

JoBlo’s Chris Bumbray wrote last September that Wilson and Page’s third-act assault on Bacon’s headquarters “is almost like the superhero equivalent of Taxi Driver” which was precisely my thinking as I watched it last night. In part because I never believed in Taxi Driver‘s post-shoot-out aftermath of Travis Bickle being called a hero in N.Y. Daily News accounts and receiving a thank-you-for-saving-our-daughter letter from Jodie Foster‘s parents and Cybil Shepherd looking at him admiringly and longingly as he drives her home, etc.

The divorcement from reality was total and absolute in Martin Scorsese‘s epilogue, just as the comprehensions of Wilson’s character in Super are saturated with visions of delusion. Okay, at the very end there’s a glimmer of self-recognition and acceptance of the way things really are, but mostly Wilson is DeNiro’s Bickle and vice versa. An excellent thing, that.