Surprise: The Butler Isn’t Half Bad

Line by line The Butler seems simplistic and given to racial cliches, certainly as far as some the blatantly racist and/or dismissive white-folk behavior is portrayed. And yet the modest dramatic cards (Cecil kowtowed to the powerful but was dignified and well-mannered, his wife felt neglected, his activist son disapproved) are dealt plain and face-up.

The lobby-chatter reactions after my screening in Manhattan a couple of weeks ago were fairly positive. Nobody was dismissing it. The bottom line is that Lee Daniel’s The Butler will be respectably reviewed for the most part and will almost certainly make a lot of dough.

But I don’t see a lot of awards action. Okay, maybe some buzz for Forrest Whitaker, who is better-than-pretty-good in the title role, but let’s not get carried away. (It’s nowhere close to his rocket-fuel performance as General Idi Amin in The Last King of Scotland .) Oprah Winfrey delivers in a believable, lived-in way but she’s basically playing a “wife of the lead character” role, and it simply hasn’t been written with sufficient bite or breadth. The most interesting supporting performances are (a) John Cusack‘s as Richard Nixon (not an imitative turn but one that does a decent job of summoning Tricky Dick’s hustler spirit and late-career despair), (b) David Olewoyo as Whitaker’s often-pissed-off activist son, and (c) Alan Rickman‘s as Ronald Reagan.

I have to say something in support of poor Lyndon Johnson, who is portrayed by Liev Schreiber as a coarse buffoon who craps in front of assistants (Doris Kearns Goodwin was a source on this alleged tendency) and repeatedly uses the term “nigger” with cavalier indifference. I’m not saying that the Southern-born Johnson didn’t use that term among his white political cronies, but to suggest that he threw it around blithely in front of African-American subordinates like Cecil is a crude caricature.

I’m saying this because of an anecdote passed along by Johnson administration attorney Roger Wilkins in David Grubin‘s LBJ, a PBS American Experience doc that originally ran in 1991. Read the following transcript and tell me LBJ wasn’t at least semi-sensitive about using the “n” word: 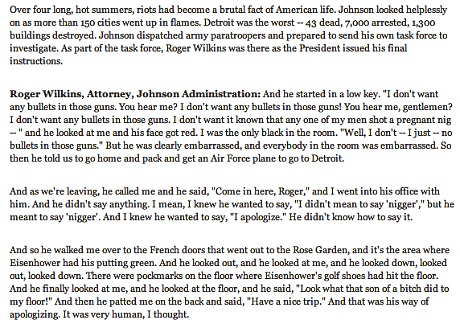