A year or two ago The Hollywood Reporter commissioned a survey of members of Academy of Motion Picture Arts & Sciences about their Oscar-blogger reading habits. I’ve been told by three sources that Hollywood Elsewhere fared pretty well in this survey, and, I gather, equally as well in a survey that was just conducted. HE placed among the top five, I’m told, with Deadline‘s Pete Hammond on top followed by THR’s Scott Feinberg, TheWrap‘s Steve Pond, Indiewire‘s Anne Thompson and myself. I asked around for hard corraborating data with a pledge that I wouldn’t discuss or tweet about it, but as I was more or less blown off I thought I’d at least mention what I’ve been told, as I’m convinced it’s valid. Naturally HE’s ad rep will be incorporating this into correspondence and conversations with Oscar-season advertisers.

I haven’t looked at webcams for a good ten years or so. That’s because in the early aughts they didn’t deliver fluid video of scenic spots in Rome or Times Square but jerky low-rez images composed of a series of stills…and of course no sound. Now that’s changed. Earthcam.com currently delivers clean high-def video of tourist hotspots all over the world, and with good sound. I noticed this earlier upon reading a Chris Willman piece about the Abbey Road crosswalk and album cover shot. It’s dark over there now (4:10 pm Pacific) but check out the Abbey Road webcam during London daylight hours — you can watch people snapping photos of their friends walking the crosswalk all day long. This is what I had hoped webcams would do from the get-go. Now it’s finally happening. Very cool. 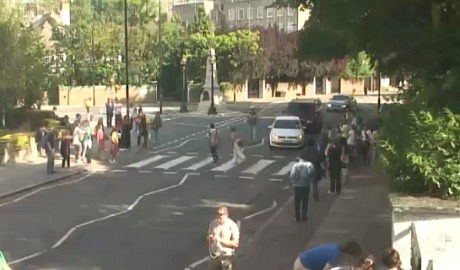 We all know that the characters played by big movie stars in action thrillers and TV series always have an abbreviated manly sound. All screenwriters understand this. You don’t give the brawny hero a name like David Poland or Ron Fairly or Jeffrey Wells or Lytton Strachey. Those names convey mild-mannered equivocation, learned liberalness, moderation. No, the studly, stand-alone action hero has to be called Frank Bullitt or Josh Randall or Walker or Bronk or Jack Reacher or Lew Harper or Shane or Ethan Hunt or Ram Bowen.

The pretentiousness of that snail-paced, left-to-right tracking shot is intolerable. I don’t know what Visitors (due to premiere at the Toronto Film Festival) is about but we’re all familiar with the films of Godfrey Reggio so I can guess. This may be the most unappealing trailer I’ve ever watched in my life. I can’t wait to trash this film. I love black-and-white photography but I’m convinced I’m going to hate it. I’m not going to sit still for another one of these movies in which third-world types stare at the camera and try to guilt-trip me for living in an industrialized nation. Or for not caring enough about the victims of Katrina, which happened eight years ago. If Visitors is represented in any way, shape or form by this trailer (which I naturally suspect), I will stab it in the chest with a butter knife.

An Oscar play for Judi Dench in which she gets to play spirited, spunky, scrappy. A battle of wits and personality between Dench’s character and the author-journalist played by Steve Coogan (the latter having produced and co-written the script with Jeff Pope). A mother-son “heart” movie from Stephen Frears (The Queen), but with the son, an AIDS-afflicted gay Republican named Michael Hess, missing in the trailer (except in flashbacks, as a small child). Nor is Hess listed as a character on the film’s Wiki page. Is the adult Hess some kind of ghostly phantom in the narrative?