Updated: An interesting revelation came out of yesterday’s Woodstock Bluray/DVD interview session in Manhattan’s W Hotel. It casts doubt on the authenticity of the book by Eliot Tiber that the film is based upon. [Note: disputed/corrected material is discussed beginning with paragraph #9.] 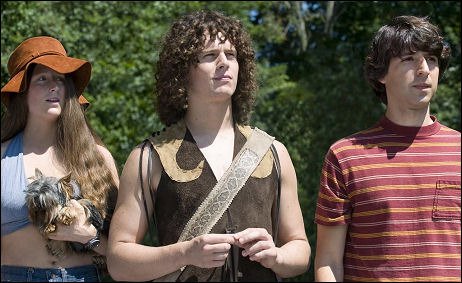 Woodstock festival producer Michael Lang said that outside of a few accurate details provided by “Taking Woodstock” author Eliot Tiber about his allegedly pivotal role in enabling the 1969 Woodstock Music Festival to happen, most of the story he tells in the book is “pretty much nonsense.”

Here‘s an mp3 of a chat with Lang and fellow Woodstock music festival producer Joel Rosenman about this and related matters.

Lang and Woodstock producer-partner Artie Kornfeld both derided Tiber’s personal recollection of his involvement with the Woodstock festival as mostly fantasy.

Lang: “Eliot’s recollections are pretty much nonsense. Past the phone call that he made to me. He called me — that’s true. He called my office, spoke to my assistant Tisha. We went up to see him. [Garbled.] He gave me this guy Morris Abrams, a real estate agent to go around and look for other land and that’s how we found Max [Yasgur]. That was really his only involvement. He didn’t know Max [and] Max didn’t know him. The rest of it is pretty much nonsense.”

Lang has written his own book about the historic festival called The Road to Woodstock (Ecco), which comes out at the end of the month.

Lang: “Taking Woodstock” “is a book that [Tiber] has written three times. And what resonates, I think, is that sort of sincere stuff about how he raised his parents, what that relationship with them was like, and what he was feeling because of being closeted…living that other life. And what happened when we descended on that town and on his motel. That part of it is accurate. The rest of it is what he would have liked it to be….given his druthers. 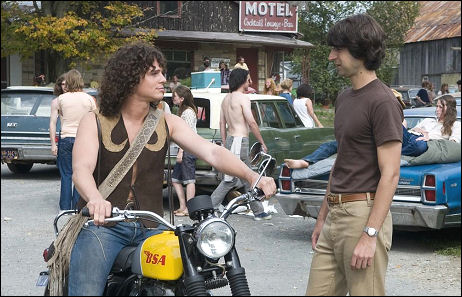 Rosenman: “We’re not so much about accuracy [for] that book and that movie when it comes to Eliot as we are having Woodstock appear in the media, as the way Michael makes it appear as it was [in his book].”

Update re disputed quotes and information (filed at 6:51 pm eastern): I also wrote this morning that “doubt has been cast on the alleged intent of Ang Lee‘s Taking Woodstock (Focus Features, 8.14), particularly statements by Lee that he deliberately chose not to use footage from Michael Wadleigh‘s Woodstock 1970 documentary for aesthetic/creative reasons.

“Information provided yesterday by Warner Bros. director of feature post production Kurt Galvao suggests that Lee wasn’t being entirely truthful with the press in Cannes when he said he decided against using even a few snips of Woodstock concert footage in order to stick to Taking Woodstock’s particular turf (i.e., the story of Eliot Tiber). Galvao said that Taking Woodstock reps actually tried to get hold of Woodstock footage and were turned down.”

I asked Galvao about this matter twice yesterday and he didn’t equivocate or modify his words in the slightest. The meaning of what he told me twice was quite clear — i.e., that there was interest on the part of the Taking Woodstock team in possibly using documentary footage of the original Woodstock festival in their own film. I didn’t assume or imply that Lee or producer-screenwriter James Schamus had personally requested this footage, but was careful to say that “reps” of that film had contacted Galvao, and not those two specifically.

Galvao has nonetheless written me this afternoon via the Warner Bros. legal department to claim that I misquoted him. Here’s how he puts it:

“My comments of June 4th were misreported by you, and I would like record set straight for your readers because the misrepresentation (and misquoting) is hurtful to my reputation as well as that of director/producer Ang Lee. Therefore I am requesting that you print this letter in full.

“At no time did Ang Lee and/or screenwriter/producer James Schamus and/or Focus Features request that concert footage from the documentary Woodstock be made available for their narrative production Taking Woodstock, and for you to infer that they made this request more than once is simply inaccurate.

“The conversations that did take place between the Taking Woodstock team and Warner Bros. were preliminary ones about using B-roll (background; second unit) and newsreel footage that is owned by the Woodstock filmmakers and Warners. This footage would have been of concertgoers en route to the event, and local color – that sort of thing.

“Not long after these preliminary conversations, the Taking Woodstock filmmakers realized they’d rather stage such scenes themselves (especially since they had a great cinematographer, Eric Gautier, who shot The Motorcycle Diaries and Into the Wild), and did just that.

“Perhaps this confusion arose because during the course of my interview with you, I did mention another party (unrelated to Focus Features or Ang Lee or their film), that did request footage from the DVD (and that request was declined).

“Again, I want to reiterate that request had absolutely nothing to do with Taking Woodstock. In no way, shape or form did Ang Lee and his colleagues misrepresent themselves or their artistic intentions, nor did they harass anyone at Warner Bros., as you unaccountably imply, least of all me.