Tammy Is A Wash 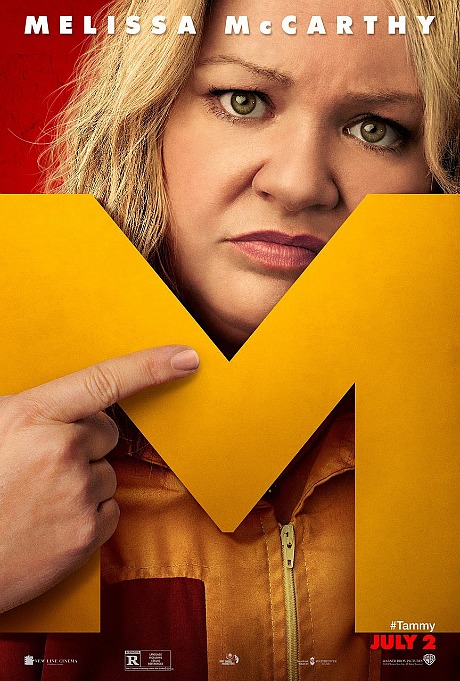 I’m guessing that McCarthy and Falcone said the following to each other in the initial stages of writing Tammy: “So we’ll start things off with the usual coarse, angry-ass, low-rent Melissa humor and…well, maybe we need to keep this up for at least half of the movie? Almost kill a deer, destroy a jetski, get fired from a fast-food joint, etc. But then we need to calm things down and allow Tammy to grow up a little and maybe even fall in love with Mark Duplass and vice versa. How do we do this? One, she has to go to jail for robbing a fast-food restaurant (not her former place of employment but another one) but only for three months or so, and then she has to receive a good talking-to from her rich lesbian aunt, to be played by Kathy Bates. And then the romantic Duplass current has to kick in.

“So it’s basically a fat-ass female Animal House meets a mother-daughter Thelma and Louise for the first half. Hey, who can we get to play Tammy’s mom since we lost Shirley MacLaine? She has to have white hair and granny glasses and swollen feet…wait, what about Susan Sarandon? And then we need to shift into an insightful, emotional-coming-together heart flick with the usual homilies during the second half or…whatever, the last 40%. Is it good enough? Good enough to make money, right? That’s all Warner Bros. cares about.”

The basic idea behind Tammy (Warner Bros., 7.2) seems to be that Melissa is us and we are Melissa, and we all need to just howl with hyena laughter as we spit up portions of a half-consumed Big Mac while a teaspoon of non-dietary Coca Cola spills out of our nostrils. And then we need to cry a little and hug each other. The girls, I mean. The guys…well, some of them are okay (i.e., fellows like Duplass) but you know, they have their own way of thinking and being. They have their place. But rich lesbians with huge homes are where it’s at, man.

I didn’t mean to sound snarky just then because Bates’ rich lesbian aunt delivers, as indicated, the only good moment in Tammy. She sits down with Melissa’s character (i.e., her cousin) and basically says, “Grow up and stop the immature angry bullshit…if you want your life to change you have to focus and clear your head and work your ass off. Bitching and moaning is all you’ve been doing your whole life, but that won’t get you anywhere.”

If we lived in a free and open society instead of a Sunni p.c. dictatorship, I could and would say what I really think but I can’t.

Can I say that Tammy is a burn for McCarthy’s fans? You should have felt the vibe in the room when Tammy ended last night at the Arclight. Okay, whew…that happened! When a film is really good people tend to huddle in groups in the lobby and talk it over or at least walk more slowly back to the garage. I noticed last night that people were walking back to the garage with a little more haste than usual.

I’m not blaming the costars for acting in this thing. Another paycheck gig, bills to pay, no worries. Bates and Sarandon are fine; ditto Allison Janney as Tammy’s mother…what, McCarthy is in her early 40s and Janney is, what, in her mid 50s? Forget it, doesn’t matter. Dan Aykroyd, Duplass, Gary Cole, Sandra Oh, Toni Collette, Nat Faxon as Tammy’s ex and Falcone as a fast-food restaurant manager dickhead. I’m sure they all had a good time at the wrap party.