The U.S.-only version of Bertrand Tavernier‘s In The Electric Mist, a truncated thing that will turn up in DVD stores on March 3rd, wasn’t as hard to watch as I’d been led to believe by certain critics. Ever since Tavernier’s longer, more atmospheric cut played at the Berlin Film Festival earlier this month, the word has been that the 15-minute-shorter U.S. cut is “brisker but less coherent,” as Variety‘s Leslie Felperin put it. 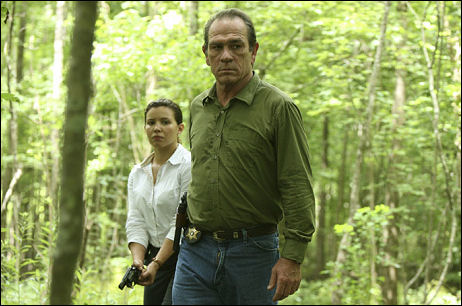 Felperin also wrote that the shorter version ends with a “tacky summing up” and a self-consciously spooky final twist that “makes [it] play like a made-for-TV movie.” Actually, it uses the exact same final shot that ended Stanley Kubrick‘s The Shining, although it’s coming from a different place.

The underlying idea, in any case, is that ghosts are swirling all over, under and through southern Louisiana’s swamplands and low-lying small towns, reminding their more receptive residents of the journeys our ancestors took, the burdens they carried, what this country used to be and still needs to be, dammit, if at all possible.

The 102-minute U.S. version is a familiar whodunit-type deal that’s far from terrible. The problem is that the pacing and exposition feel a little too choppy and rushed. This is a movie that needs to breathe, and you can just tell that the guy who recut Tavernier just wanted a whodunit that unfolds along traditional lines. The guy was obviously saying all along, “Trim the flavor and cut to the chase.”

I was semi-aroused and intrigued with this 102-minute version, being content with and even soothed at times by Tommy Lee Jones‘ performance as Dave Robicheaux, the slightly mournful and laconic lawman hero of several James Lee Burke novels. Yes, Jones has played this kind of weary fellow before, and as far as I’m concerned he can on playing this kind of guy until he’s 90 if he wants to. 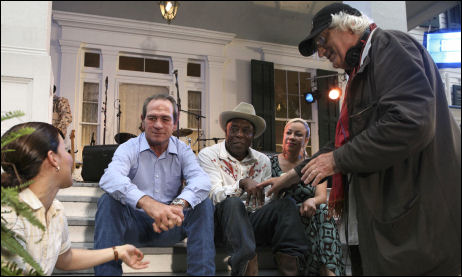 Some of the Electric Mist cast and the white-haired Tavernier during the shoot.

The whodunit side, I have to say, isn’t as interesting as just being in the world of the film and the story. This is a flick about mood, aroma and personality. There are niggling plot points to consider, yes, but only people who read crap in airports and love vacationing in Vegas and Cancun and Atlantic City will care about that. I’ve been through lone-wolf investigative dramas like this all my life. We’ve all watched them to death and are sick of the same old hash, and we want something more, dammit. Which is what Tavernier was on about, or so I gather. Tryng to explore the unspoken seep-through stuff.

The problem with the shorter version is that it needs more moisture and mosquitoes. It needs to slow down even more than it does now and let the old natural swamp vibe just seep in and intoxicate. This, I presume (and also according to what L.A. Weekly critic Scott Foundas wrote), is what Tavernier’s version tries to do.

The IMDB says Tavernier’s version will open in France on 4.15.09 and in Belgium a week later. One hopes that discs of his cut will find their way to these shores before too long. The best thing, of course, would be for special screenings of Tavernier’s version to show at the Film Society of Lincoln Center through Kent Jones, at the Film Forum, at the American Cinematheque in Los Angeles, and at other venues for serious film lovers around the country. 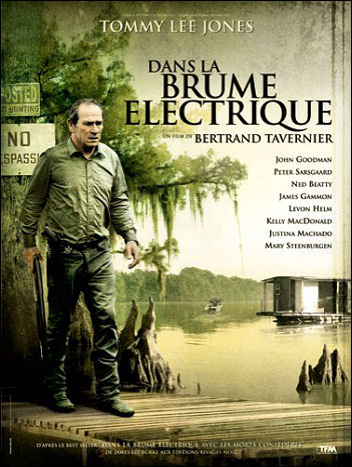