The costs of “Ultimatum”

The ad slogan for The Bourne Ultimatum (Universal, 8.3) is “this summer Jason Bourne comes home.” But if the Universal marketing guys were to dream up a slogan that honestly characterizes the financial realities behind the making of the third Bourne flick, it might read “the more money an action franchise earns, the more money the next installment will cost. Just ask Jason Bourne.” 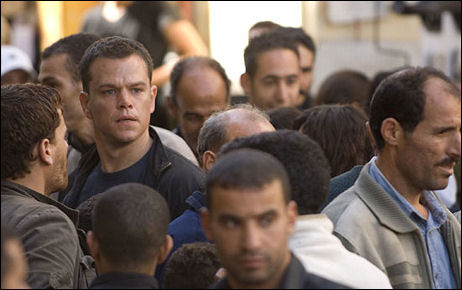 That’s a fairly dull slogan so let’s stop cute-ing around and get down to brass tacks. I was told last night that The Bourne Ultimatum, which is locking its final release print over the holiday, has cost more than the first two Bourne films combined, or $175 million. (The Bourne Identity and The Bourne Supremacy both cost $75 million each to shoot, per IMDB and Wikipedia.) The Universal position is that Ultimatum cost $130 million. Big gap there.
I really and truly don’t give a toss how much The Bourne Ultimatum cost. All big-studio movies seem to end up costing a fat pile, and it’s hard to sustain an interest in such things when everything is $100 million this and $200 million that. I just want the film to be good, and a slightly prejudiced friend of Ultimatum tells me it’s “flat-out great, and that’s what should matter most of all.
“One of the things that distinguishes the Bourne films is that authentic, you-are- there, on-the-ground subjective shooting style — that near-verite trademark feel,” he says. “The production visited Morocco, Paris, London, Spain, Berlin and New York, but the Bourne series is not one of those metastasizing, ever-inflating behemoths like some other franchises. [Director Paul] Greengrass has become an even more accomplished director since the last go-’round and his virtuosity is one of the things that is a hallmark for Ultimatum.”
Okay, but I don’t want to experience the same heebie-jeebie, super-shaky handheld photography and spazzy machine-gun cutting that was used in two or three of The Bourne Supremacy‘s action sequences. Some moviegoers went with it, and some (including myself) found it infuriating. I was saying to myself, “Stop whipping the camera around and cutting everything so fast…it’s too much work to follow what’s going on!” 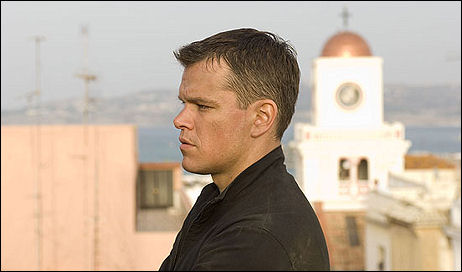 Where were we? Oh, yeah, the higher costs. I’m told that the engorged Ultimatum tab is due to an alleged 35 days of extra shooting above and beyond the original principal photography schedule. (The Bourne Ultimatum began shooting on 10.2.06.) “They weren’t happy with what they had so they kept going back in stages and adding or re-shooting this and that,” is how it was conveyed to me by an off-the-lot source.
This sounds like a pretty good thing from an audience perspective. The more exacting and perfectionist Greengrass and producer Frank Marshall were, the better the final film is likely to be…right?
I tried to get my Universal insider to confirm or question the “extra 35 days of shooting” story, and he replied that “none of that can accurately be told. It’s not a matter of ’35 extra days’ or the schedule starting on this day and going until that one. There were hiatus breaks built into the schedule as well, so it can’t be said that it started here and shot till then. The hiatuses were built in to accommodate the unorthodox schedule.”
All he would say beyond this is that “‘additional’ stuff was shot in all locations. The same was true of Supremacy and Identity.”
Universal’s Bourne Ultimatum website says Identity and Supremacy have earned over $500 million in global box office. Wikipedia says Supremacy did $288,500,217 worldwide and Identity did $213,925,107 million. Supremacy, in other words, made almost four times as much as it cost to shoot (i.e., $75 million), and Identity earned almost three times as much as it cost to shoot (i.e., ditto).
Boil it all down and the higher budget figures (be it the official $130 million or the alleged $175 million) suggest that Ultimatum can’t be the breadwinner that the first two films were. 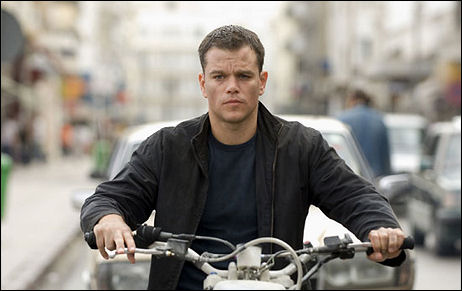 The Ultimatum friend argues that using a budget-gross ratio formula “loses steam when you consider the nature of franchise revenues and how this series has built considerably from first to second film and how those ancillary revenue streams — everything from DVD to TV, etc — are different for the third in a successful series.”
I told him that I absolutely love that shot in the Ultimatum trailer of Damon jumping from one building to another in Tangier with the camera jumping right along with him. “A very cool CG shot,” I said. But it’s not that, I was told. “The cameraman actually followed the jump and caught that as a practical,” the Universal guys says.
With a crane, I presume he meant. The shot is so smooth and flotating it’s hard to believe it’s not a digital creation. I’ve watched it five or six times this morning. The guy just wrote back and said “not a crane — the cameraman made the jump himself off the roof!” To which I replied, “Oh, come on…!!”