The Fix Is In

Envelope/Gold Derby columnist Tom O’Neil is claiming that the forthcoming Best Picture win by Precious at the indie Spirit Awards next March (O’Neil believes it’s a foregone conclusion) is as much if not more about the Spirits’ rivalry with the New York-based Gotham awards as the quality of Lee Daniels‘ film. 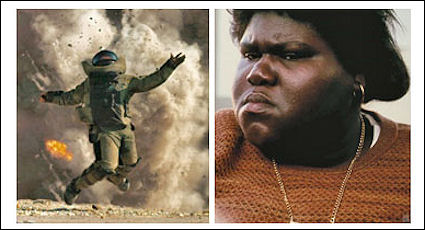 “As expected, Independent Spirit Awards lavished nominations upon Precious: Based on the Novel ‘Push’ by Sapphire today, thereby addressing the film’s ridiculous snub by the other, rival prize for independent films, the Gotham Awards, which gave their top trophy last night to The Hurt Locker,” O’Neil writes.

“This year’s clash between the two awards — bestowed by rival factions of an organization that split in 2006 — marks the height of absurdity in awards land. Each side is embracing one of the two top indies — The Hurt Locker or Precious — to the exclusion of the other. In the end, both awards look foolish and everybody loses.

“The Hurt Locker isn’t eligible at the Indie Spirits this year so it won’t be going head to head with Precious on awards night, but it was eligible last year and failed to be nominated for best picture. How clueless is that?

“Jeremy Renner and Anthony Mackie received lead- and supporting-acting bids, so we know that it was on voters’ radar. They just didn’t think it was worthy of consideration for the top prize. Instead, the Spirit nominees were Ballast, Frozen River, Rachel Getting Married, Wendy and Lucy and the winner, The Wrestler.

“In recent months, The Hurt Locker has built up deafening buzz. The Gotham Awards — based in Manhattan — saw their chance to swoop in and give The Hurt Locker the kudos love it should have received from their Los Angeles counterpart, but, strangely, the Gothams decided to snub the other top indie film in the process: Precious.”

(Which I incidentally feel was an okay move.)

“Get the picture? Can you guess what’s going to win the Indie Spirit Award this year? Does it even matter that there are four other nominees: (500) Days of Summer, Amreeka, Sin Nombre and The Last Station?