I admire and respect the moves and the intent of Speed Racer (Warner Bros., 5.9), which I saw last night at the Leow’s IMAX near Lincoln Center. Right away I was saying to myself, “All right, this is out there….infuriating but brilliantly out there.” But it offers almost nothing in the way of genuine personal charm (except for the monkey, Chim-Chim) and I began looking at my watch starting around the 45-minute mark. Honestly? More like a half-hour in.

This is a deranged, steroid-cranked family-action movie…the work of madmen — undeniably brash and looney and, I feel, desperately in need of a quaalude. Speed Racer is a piece of very audacious, high-quality….I was going to say “torture” but it’s not. It’s extremely nervy filmmaking, clearly, but the Wachowskis are way too caught up in fulfilling their “we’re cooler than any of you!” vision and in being at least two if not three giant steps in front of everyone else in terms of creating a new film vocabulary in order to explore and shake the cage while ostensibly telling a story, and a lame-ass one to boot.
The Wachowskis are so zonked by the design dreams in their own heads that they’ve delivered a new kind of monster-budget insanity. They’ve made this movie for themselves, first and foremost, and for open-minded (or at least fair-minded) critics, and certainly for film history…but they haven’t concurrently “served the corporation” and made a film that people over the age of 8 or 9 can settle into very easily or comfortably. Or even settle into with some effort. I didn’t sit there consumed with loathing for this thing. It’s too fascinating for that. But it’s also a movie that’s saying over and over, “Look at us! Look at what we’re doing!” It’s too breathtaking to really entertain. And as pleased as I was by the verve-and-moxie element, I was dying for it to end.
You have to throw out the rule book and accept that this movie is using an entirely different kind of spaceship and orbiting the earth in a way that is going to vaguely piss you off but at the same time dazzle you. Or certainly intrigue you. The refusal to conventionally cut or fade or wipe from one scene to another — awesome. But it’s not done in a way that gives any sort of familiar, recognizable pleasure, and as square as this sounds, you really do need some of that in a movie. You have to keep feeding and massaging the square guy while introducing the new hipster, and there’s very little square-massaging going on in this thing. 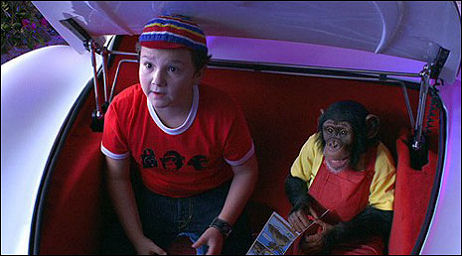 Speed Racer certainly isn’t pleasurable to sit through, character-, theme- or story-wise. In subjecting their audience to the same old pure-hearted individual contender vs. the corrupt corporation horseshit, the Wachowskis are showing their elitist-sadist colors. If it was good enough for Japanese anime and and other graphic media in its day, they seem to be saying, it’s good enough for us right now…and if you don’t like it, tough! Watching it is a bondage-and-discipline game — you feel trussed up and bound with Andy and Larry (or whatever his name is now) applying the cool whip.
But it’s more than a little ironic that for a movie that trots out the evil-corporate-mogul business for the 189th time, Speed Racer is drenched in synthetic splendor that’s been bought and paid for by corporate cash. And it’s way, way too long. It should have been a 95-minute deal, tops, but it goes on for two hours and 9 minutes.
The racing sequences are insane. You never have any idea about what’s going on. Shots don’t build or match up or pivot off each other. They collide in a kind of surreal cartoon madness. The geometric/spatial relationships between the racing competitors are almost always a complete mystery. Off with the editor’s head! And the martial arts combat sequences are nothing — fatally boring, by my book.

The performances are okay, but I found more fascination in the face of Chim-Chim than anything the humans came up with. I loved that fucking monkey, and began to really dislike — hate! — the Wachowskis for only using him for typical animal-reaction cutaway shots. If they’d only dwelled on his facial reactions for seven or eight seconds at a time (or more!). But no — over and over they do a quick Chim-Chim laugh cut and then back to Emile Hirsch or John Goodman or Christina Ricci or Susan Sarandon or the mugging, heebie- jeebie supporting players. Fuck! (And I don’t like to use profanity unless it fits.)