I arrived at the AT&T store at Beverly and La Cienega at 7:45 am, looking for that iPhone 3G, presuming the crowds might not be as heavy as they were last summer. Wrong — I was either the 112th or 113th person in line. At about 7:50 a shlubby-looking AT&T guy with a black 3G T-shirt came out to explain they only had 110 phones, so 35 or 40 of us might have to come back tomorrow when new phones will arrive. But…you know, we could stick around regardless and hope for the best. 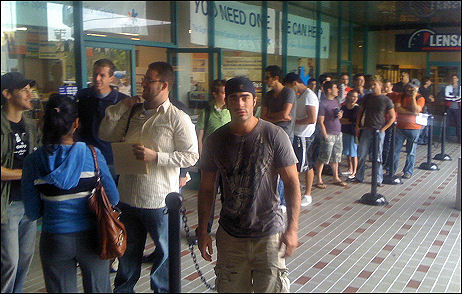 Right away my forehead was dark and furrowed. All these weeks and weeks of prep and advance hype and all the WeHo AT&T store guys ordered (or all the Apple guys were able to ship) was a lousy 110 units? For a major West Hollywood location that services almost nothing but dinks (double income no kids) and yuppies?
Fine, I said to the guy, but of the 110 phones you have how many are 8 gig (selling for $200) and how many are 16 gig ($300)? “We’re working on that,” he said, grinning slightly. “You’re working on it?,” I asked. “You don’t know what you have in your own inventory?” His smile tightened. “We’re finding that out now,” he said.
I then suggested the obvious to the guy, which would be to go down the line with a clipboard and ask each person if they intend to purchase only the 8 gig or only the 16 gig, or if they’re determined to buy one or the other no matter what. That way the store guys could calculate more accurately how many customers they can service, and then they could tell those customers with a low likelihood of purchase they can…whatever, scoot home and come back later.
On the other hand I understood where the smiling T-shirt guy was coming from. It takes focus and concentration to ask questions and write down figures, and he was dealing with enough aggravation as it was. If you’ve ever tried to hire people for a relatively low-paying job (as I have), you learn soon enough that 80% or 90% of the applicants are dumb as fenceposts or have sluggish attitudes or both. It’s very hard to find someone who might be competent, much less someone who might be exceptional. 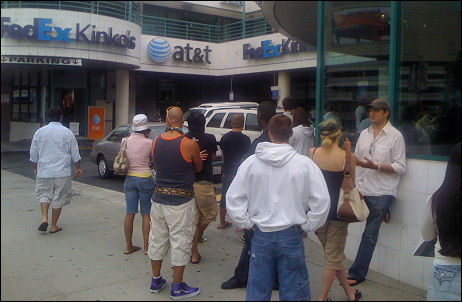 Here’s a report on the initial sales in Japan, Europe and New York by Computerworld’s Gregg Keizer.