“The Invasion” is coming

Update: Warner Bros. will screen Oliver Hirschbiegel‘s The Invasion (8.17) next Tuesday, which is the only screening I’ve heard of thus far. By any fair-minded standard, this body-snatchers movie with Nicole Kidman and Daniel Craig has been playing hide-the-ball. It doesn’t look too bad, to judge by the trailer. “You’ll feel the same the next morning,” “Don’t show emotion,” etc. What do people expect from this thing…innovation? It’s an old shoe with new soles and a spit-shine. 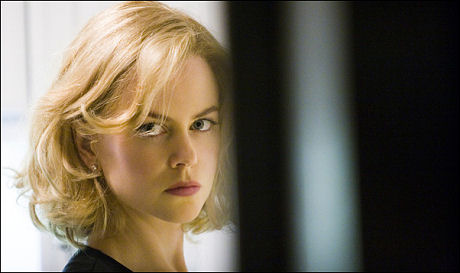 It was reported months ago that The Invasion doesn’t bear the stamp of the German-born Hirschbiegel (Downfall) as much as that of producer Joel Silver and reclusive weirdo directors Larry and Andy Wachowski‘s.
Collider.com‘s Steve Weintraub wrote four months ago that Hirschbiegel’s original cut didn’t go down all that well with Silver and various WB suits (i.e., not enough action beats) so Silver brought in the Wachowskis for a fix job. They reportedly re-wrote 2/3 of it and then got James Teigue, the Wachowski flunky who directed V for Vendetta, to shoot the additional footage.
I haven’t seen the TV trailer, but a friend says it’s all Kidman and no Craig. What, does he have poison ivy? On top of which The Invasion isn’t tracking all that strongly. Tough times and agitated mindsets over at Warner Bros.