I don’t want to go into this all half-cocked….actually, no, that’s okay…I’ll readily admit that this is a half-cocked notion. It’s just that two initial reactions I had to Charlize Theron‘s Young Adult character — that she’s a cautionary metaphor for “a kind of egoistic Kardashian-like malignancy afoot in the culture right now” as well as a kind of monster in her own right — have been somewhat refined. 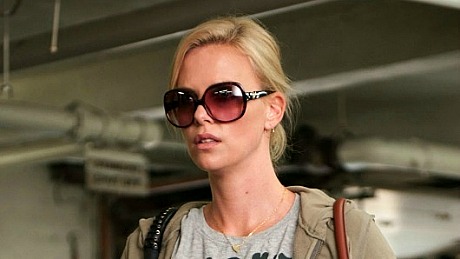 We’re talking about an emotionally predatory Jason Voorhees here, and yet armed with a lot of sassy, funny, outrageous-deadpan dialogue. And I’m now starting to think of Theron being closer to Jack Torrance in The Shining than Jack Nicholson‘s other similar-type character, Bobby Dupea in Five Easy Pieces, whom I mentioned the other night.

The key component is that Theron’s Mavis Gary, an alcoholic writer of young-adult fiction who visits her hometown to nab an old boyfriend (Patrick Wilson) who’s now married with a kid, is unrepentant, and if anything is deeper into her mudhole at the end than at the beginning. That’s certainly Jack Torrance, all right. The other factor is a kind of balls-to-the-wall acting style that isn’t looking for empathy or sympathy. Either you embrace the fact that Mavis is a noxious wreck and that there’s nothing about her that is comforting or relatable…or you don’t.

It was clear from the get-go that Nicholson wasn’t playing a normal, average, relatable, ah-shucksian guy in The Shining. That moment when they’re driving up to the Overlook in that yellow VW and talking about the Donner party and Nicholson goes “See?…it’s okay…he saw it on the television!” with that goofy demonic look in his eye, you knew he was coming from a grand guignol place. On some level this is what Theron is doing also, I think. She’s not playing “one of us.” She’s playing a myopia-afflicted freak…but sharing dark cryptic laughs as she goes along, or at least for the first three-quarters of the film.

You know she’s neurotic right away, and you start to see the obsession early on, and then she gets into it a bit more, and then she gets worse and worse. I think if you go into this film knowing the old third-act redemption routine simply isn’t in the cards and the only way to go is to roll with crazy Mavis while getting your bedrock reality fix from Patton Oswalt‘s half-crippled guy, the film will work for you. And you may find, as I have, that Theron’s “arc” (if you want to call it an arc) is a little bit like Jack Torrance’s gradual descent into lunacy.

Compare The Shining‘s staircase-and-baseball-bat scene with the front-yard freakout, wine-on-the-dress scene in Young Adult, and you’ll notice a vague similarity or two.

Patrick Wilson’s vaguely wimpy Buddy Slade isn’t exactly Wendy swinging the bat and whimpering “I just want to go back to my room and think this over!”..but he is a bit of a softie and a pudgehead. But Charlize/Mavis saying “Look, you’re miserable here…this town is awful…I’m here to save you and I’m furious that you’re not hearing me!” isn’t all that far from Jack saying “You’ve had your whole fucking life to think things over! What good is a few more minutes gonna do you now?”