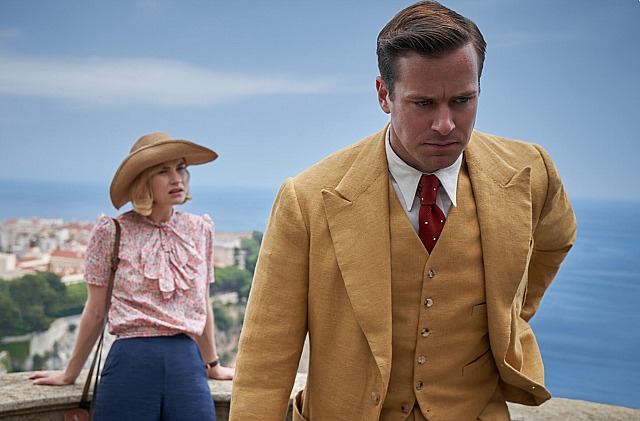 Wheatley’s version feels like a faint attempt to recreate that world without the slightest interest in really getting it right. The 1930s cars and costumes are correct as far as they go, but the feeling of that time is completely absent. Everyone is playing dress-up. The atmosphere is vapid. The actors behave as if they’re acting.

I was nauseated by a mustard-colored suit that Hammer wears during the opening Core d’Azur section. There’s no way Olivier’s Maxim would have glanced at such a thing, much less worn it. Mustard should be used only as an accent color.

For whatever reason Wheatley and screenwriters Jane Goldman, Joe Shrapnel and Anna Waterhouse have discarded the opening of Hitchcock’s version, in which Fontaine comes upon Olivier standing atop a Mediterranean cliff and seemingly contemplating suicide. Fontaine calls out “no…stop!”

When Olivier, Fontaine and the obnoxious Mrs. Van Hopper (Florence Bates) meet soon after in the lobby of their Monte Carlo hotel, the edge-of-suicide incident permeates the atmosphere, to put it mildly. It actually informs their relationship from that point on.

There’s definitely a sense of something ghostly in the Hitchcock film…a faintly spectral presence of some kind. There’s no overt suggestion of an actual ghostly figure but now and again you can sense something lingering, some aspect of the dead Rebecca that has hung on in some way. In Wheatley’s version there are some ghost bees, a CG swarm of some kind. There’s also a visual hint of something ectoplasmic in another scene.

Lily James (currently embroiled in a sex scandal with Dominic West, and hence not doing as much promotional press as she might have) is okay as the second Mrs. de Winter, but I didn’t believe she was a 1930s woman for one infinitesimal second. She’s strictly a 21st Century gal.

Hammer is miscast as Maxim — not believable as the Real English McCoy for a single instant. Kristin Scott Thomas isn’t bad as Mrs. Danvers, but she’s less spooky than Judith Anderson. and not as lesbianish. George Sanders delivered a much more engaging Jack Favell 80 years ago than poor Sam Riley manages in the current version. Ann Dowd‘s Mrs. Van Hopper struck me as overly coarse.

October 21, 2020by Jeffrey Wells28 Comments
« Previous post
“They Woulda Called Me ‘Beijing Barry'”
Next post »
Hey Hey In The Hayloft