Three additional thoughts about Amy Adams‘ performance in Enchanted. You’ll never read these on The Envelope because they’re not cheer-leady enough, but they’re true from a certain perspective. 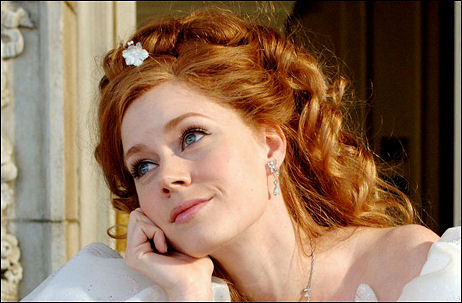 One, the animated version of Giselle, her fantasy-land heroine, is right out of the Snow White mold, which is to say younger than springtime with a creamy peach-blossom complexion. But within seconds of her arrival in Times Square as a biological presence it’s obvious that Giselle is no spring chicken. Adams is 33, and has the smile wrinkles to prove it. She’s being called a semi-new discovery whose career has been launched by Enchanted, etc., but the hard fact is that things begin to dry out for most actresses when they hit 40 or so. Hooray for Adams and her big score, but she has about six or seven years to make the most of her good fortune. I’m just saying…

Two, Giselle is a quintessential innocent, but she’s so wide-eyed and clueless during Enchanted‘s first act that it’s hard not to think of real-life women who resemble her. Girly-girl bimbos, I mean — pretty, delicate, not especially bright (or looking to hide their intelligence so as not to intimidate insecure suitors), looking for a sugar daddy, in some ways shut down and not very curious about life. It can be argued that such women are not all that attractive in the final analysis because underneath the act they’re serious “pieces of work” with entitlement issues up the wazoo. Surrendering to the conceit of Giselle, therefore, is something of a mixed bag. There are no Snow Whites out there. Everything is “real” and tainted to some degree.

Three, the question of “range” hovers over Adams given the similarities between Giselle and her open-hearted pregnant wife in Junebug. A quote on her IMDB page doesn’t necessarily suggest she’s a one-trick pony, but perhaps an actress who’s especially good at playing a particular type. “I think that I’ve always been attracted to characters who are positive and come from a very innocent place,” she’s quoted as saying. “I think there’s a lot of room for discovery in these characters and that’s something I always have fun playing.” If Adams wants to really make her mark, she’ll need to go wider and braver.