“I understand the spiritual payoff in successfully climbing a mountain as brutal and vicious as K2, but if you make a go of it and things don’t go your way, too bad. You bought it, pal. You knew the risks. So it’s hard to shed tears or feel much for those whose deaths are explained in The Summit. They were good fellows and skilled climbers but they weren’t geniuses and sometimes God takes you out. They took a bet that they’d be among the 75% who would make it and they lost. Tough tits.

“Imagine a doc about 10 guys with poor eyesight who decide to try and cross an unlighted six-lane freeway at 10 pm while drunk and wearing black. I would fail to see the tragedy if two or three of them get hit by cars. I would in fact fail to be even somewhat moved. Hey, guys? I’m really sorry about your getting hit by passing autos but I guess you knew the odds of getting hit were pretty high, right? You chose to wear black, you chose a section of the freeway that had no lighting, you chose to get drunk…what do you want from me?

“I don’t want to give The Summit a blanket put-down. It’s very carefully made. Loads of hard work went into it. It didn’t piss me off or irritate…well, okay I guess it did irritate me to some extent. But it’s a first-rate attempt at digging into detail and being fair-minded and determined to follow leads. And it’s quite the eye-filling epic. Cheers and salutations to Ryan, screenwriter Mark Monroe, cinematographers Robbie Ryan and Stephen O’Reilly, and exec producers John Battsek, Pat Falvey, Darrell Kavanagh and John McDonnell.

“If nothing else, The Summit makes you feel very good that you’re in a warm movie theatre and not freezing or falling to your death amid ice, snow and avalanches at 26,000 feet.” 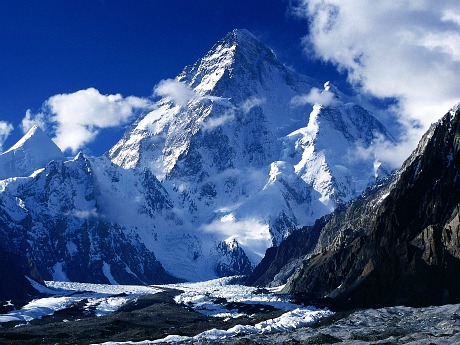 “A week after the tragedy Freddie Wilkinson ran a fairly thorough Huffington Post account of what happened. He wrote another piece in December 2008 that looked at the tragedy in greater detail. It’s a story with a lot of angles, a lot “if only this hadn’t happened” factors.

“In a way that’s kind of the problem with The Summit — too much detail, too many POVs, too many climbers, too many ‘on the other hand’ considerations. And too many widows or relatives of same suggesting this and that.

“I admire Ryan for not jumping to easy or facile conclusions, of course, but on the other hand you’re looking for a clear through-line and not too many flashbacks or asides and a clean, graspable sense of who messed up and whose deaths were avoidable and whose weren’t. Read Wilkinson’s articles if you want a concise account.”