They Came To LACMA

Last night I didn’t attend Film Independent at LACMA’s screening of Moneyball at the Bing Theatre at LACMA. (I’ve seen Bennett Miller‘s film five or six times.) But I did attend a pre-screening q & a with star-producer Brad Pitt, Jonah Hill and Oakland A’s general manager Billy Beane. Thanks to FIND’s Elise Freimuth and LACMA host, curator and gadfly Elvis Mitchell, I mean. Without their help I would have been out on the pavement. 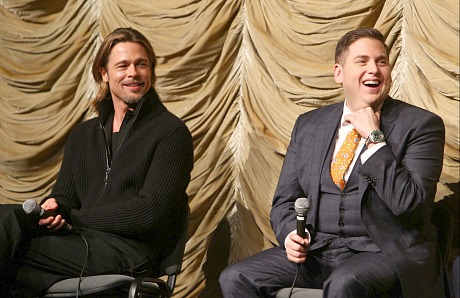 It must be said that Freimuth’s assistance aside, LACMA/FIND rules regarding press coverage are a pain in the rear. No photography or recording of any kind, they say (largely due to a fear of flash photography), plus the constant eyeballing of possible violations by hawk-eyed LACMA ushers. Sony, Pitt and Hill are looking for favorable coverage and attention, of course. And I was naturally looking to provide that (being a Moneyball supporter from way back), but LACMA/FIND regulations blocked and delayed this to some extent. I certainly didn’t feel free to audio record last night’s event. On the other hand Freimuth was gracious enough to provide the two Pitt-Hill shots on this page, so thanks much.

It must also be reported that LACMA/FIND (or Sony, perhaps) made a very strange call by deciding to include Moneyball‘s Oscar-nominated editor Christopher Tellefson and sound mixer Deb Adair in the pre-screening q & a. The place was packed to the rafters with hoi polloi and invited guests, and nobody wanted to hear them speak. The always-gracious Mitchell asked them three or four questions, of course, and Tellefson at one point offered a long, sprawling answer. And I swear to God you could hear the exact same response coming from every silent audience member in the room: “Why are these two sharing the stage with Brad Pitt? No offense and due respect but we didn’t wait in line for an hour or more to listen to these two…c’mon! Whose idea was this?”

It was fun to listen to the deep-voiced Beane, whom Pitt portrays in the film, and to savor his sense of humor and candor, and his observations and anecdotes. And Pitt and Hill’s commentary, etc. All to the good. 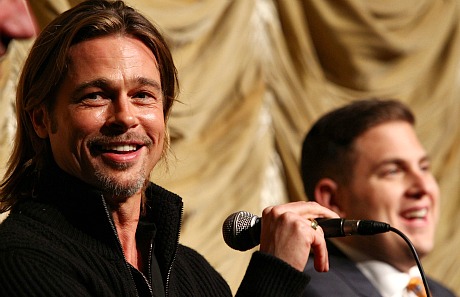 Here’s a video interview that Indiewire‘s Anne Thompson did with Pitt and Beane following the q & a: