Things I Saw, Moments That Mattered, Things I Didn’t Hear Because Of The Wallah-Wallah…All Of it 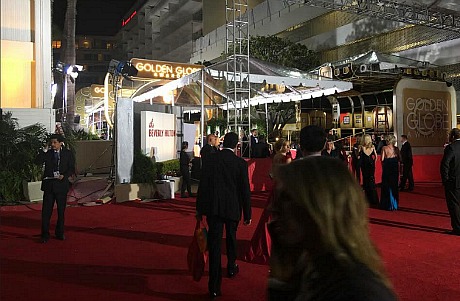 Why did I watch the Golden Globe awards telecast last night from the Fox viewing party adjacent to the Beverly Hilton? Because I wanted to be there, had to be there, needed to be. It was necessary. And thank you enormously, Fox publicists, for inviting me. Seriously — it meant a lot.

True, the less-than-brilliant sound system and the wallah-wallah from the guests, especially during the final 40 minutes or so, resulted in my missing 80% of the material, but them’s the breaks. I wanted to be there, and I wanted to hit the parties and schmooze around like everyone else.

Hyman Roth: “This is the business we’ve chosen. I didn’t ask who installed the shitty sound system. I didn’t ask the 30something yappy-yappies to please tone it down and show a little respect while Meryl Streep was speaking. I was polite and smiling the whole time, which is another way of saying I sat there and took it like a man.”

January 9, 2017by Jeffrey Wells12 Comments
« Previous post
Ecstatic Mingling of Mood, Music, Spirit
Next post »
Streep Is A Valkyrie, Trump Is A Beast