The new Salt Unrated Edition Bluray (out tomorrow) actually contains three versions of Phillip Noyce‘s spy thriller — the original theatrical cut (95 minutes and 54 seconds), an extended version (96 minutes, 56 seconds) and a director’s cut (99 minutes and 48 seconds). The longer cuts are said to be worth the purchase price in themselves.

The extended version is the original cut before Noyce went back to shoot a new ending (Jolie leaping out of chopper, splashing to the Potomac, running into the woods, etc.) and the action scene in the middle of the film in which Salt kills her Russian mentor and his cohorts on a barge. The director’s cut is Noyce’s extended unrated version of the material that made it into the theatrical release.

The theatrical version with the re-shot ending was preferred by the studio because it left the door open for a sequel.

In his 12.17 review, Den of Geek‘s Mark Pickavance opines that the director’s cut “has significantly more balls in delivering a less-than-perfect ending. The extended cut is also interesting, because in it the death of one character, Daniel Olbrychski‘s Orlov, happens at an entirely different point, which alters things quite dramatically, and results in a totally different ending.” And that taken together, these two new versions “fix a number of plot holes that the theatrical release suffers [from].

“One question everyone I asked about the theatrical cut is why Evelyn Salt runs at the end. Well, if you watch the director’s cut you find out why, and also possibly why Orlov’s plan actually works, although it’s not the plan as presented in the theatrical version.”

“What appears to have happened is that the studio liked the movie, but the [extended] cut doesn’t really allow for a sequel, so it got altered to make that possible,” Pikavance writes. “I won’t spoil what ultimately happens, but [in] the extended cut the death of Orlov happens at an entirely different point, which alters things quite dramatically, and results in a totally different ending.

“If you liked this movie then you’ll want to see both of those cuts, because even if the running time differences are in the region of four minutes, those are minutes that put some much needed edge on what is essentially a by-the-numbers spy thriller.”

This YouTube video (recorded by an American guy) from Japan explains some of the differences between the cuts. The extended cut is “way more interesting,” he says, than the theatrical version. 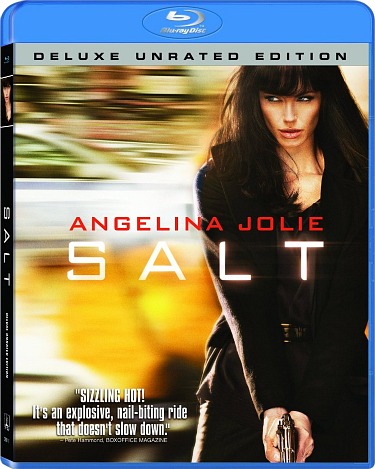 An Amazon reader’s assessment, passed along by a person close to the film and therefore presumably accurate, agrees that the director’s cut “makes the most sense plot-wise, and includes some better character development.”

Differences between the theatrical vs. director’s cut:

(1) Evelyn Salt’s opening interrogation scene in North Korea is longer and more brutal. The soldiers force a tube down her throat and subject her to more intense questioning, followed by several kicks to the abdomen.

(2) Extended scene of Orlov training little kids who will be future sleeper agents. As the kids finish a race through the woods, Orlov asks which kid was first, and which was last, whipping the last kid with a riding crop.

(3) Abduction of Michael (Salt’s husband) by Orlov’s thugs is shown.

(4) Additional scene where Michael tells Salt about a new species of spider that he has discovered.

(5) Childhood scene between Salt and [somebody] at Orlov’s training camp.

(7) Salt kills Orlov with a broken bottle, and the stabbing is shown in more detail, rather than off-screen.

(10) Liev Schreiber‘s Winter kills the president in the director’s cut, whereas in the theatrical cut, Winter only knocks him unconscious. Some have noted that the theatrical cut never made much sense, because the President would easily be able to identify Winter as the traitor.

(11) At the end of the movie, there is a voiceover that subtly suggests that the vice president is actually one of Orlov’s sleeper agents, setting the stage up for a sequel. This voiceover is not present in the extended cut.

Differences between the extended cut vs. director’s cut:

(1) The changes listed above in the director’s cut are also done in the Extended Cut, with the exception of the differences below.

2) The President is only knocked unconscious in the theatrical cut (and killed in the director’s cut). In the extended cut, Winter attempts to make his way towards the unconscious President, who is being wheeled away on a stretcher, in order to kill him.

3) The biggest difference in the extended cut is that Salt doesn’t kill Orlov until the end of the movie. So the entire sequence in the theatrical and director’s cuts where Salt annihilates Orlov’s thugs on the barge is missing.

At the end of the extended cut, she is being interrogated by Peabody (Chiwetel Ejiofor), where she fakes suicide and is taken to a hospital. She subsequently escapes from the hospital, finds Orlov (back in Russia somewhere), and kills him.