I’ve been thinking off and on about Joaquin Phoenix‘s annnounced retirement from acting, the news of which broke three or so days ago. I don’t care what he says — this is a Frank Sinatra/Daniel Day Lewis retirement. Two to three years and then back in it. But when he returns, “Joaq” might want to be a few pounds thinner. He’s been looking a little chunky lately. A little bit of a Brian Dennehy thing going on. 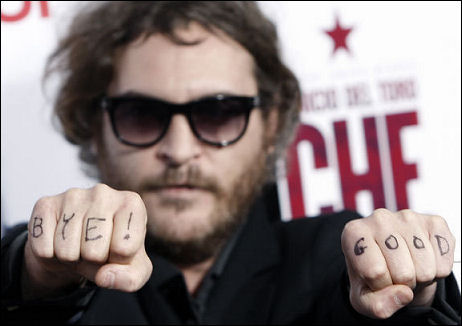 I think his decision is mainly a reaction to his having acted in three critical and commercial duds in a row — We Own The Night, Reservation Road and Two Lovers. (I’ve seen Two Lovers and can foresee its box-office fate.) Plus the fact that everyone ignored Ladder 49.

On top of the apparent fact that Pheonix likes to appear in movies that are (a) emotionally straightforward and unambiguous, (b) blue-collar-ish (i.e., films about lugs who feel weighed down by family expectations and who haven’t had an elegant education) and (b) offbeat indie-ish. And the fact that audiences have been shrugging their shoulders at such films. He doesn’t see where he fits in, and so he’s getting out…for now.