Stuart Heisler‘s I Died A Thousand Times, a 1955 remake of Raoul Walsh‘s High Sierra, doesn’t have much of a rep, but it has a great florid title. The forthcoming release of the DVD, in any event, triggered an idea for two lists — movies with great-sounding titles that made for difficult viewing, and excellent or very good films that were stuck with lousy titles. 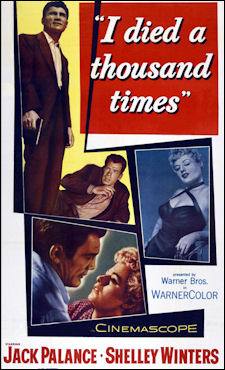 Most good films are released with decent appealing titles. But every so often a title will come along that’s exceptionally stirring, flat, dull, catchy or off-putting, and which also argues with the quality of the film, be it high or low.

Snakes on a Plane — great title, shitty film. I Dismember Mama — classic title used for exploitation sludge. Bedtime for Bonzo is actually fairly brilliant. Stop! Or My Mom Will Shoot must have sounded good before the film was seen. The Human Stain was a mildly underwhelming drama with a title that sounded like a description of semen on the bedsheets. Ishtar was a misbegotten but half-decent comedy, but had a terrible title.

I realize that today’s audience doesn’t like titles that aren’t plain and hot-dog simple, but there’s something wrong with you if you don’t enjoy titles that sound like they came off a pulp paperback. I Died A Thousand Times is one of those noirish, dark-fate titles like Out of The Past, His Kind of Woman, Let No Man Write My Epitaph and O Lord, Please Don’t Let Me be Misunderstood.