A couple of days ago the Canadian government relaxed its tough Covid restrictions on public gatherings, and suddenly the Toronto Film Festival, which many some distributors had more or less relegated to the “forget it” pile over its (recently modified) mostly streaming policy, was back in the game. But how “back in the game” can an allegedly big-deal festival be with headliners like Clifford the Big Red Dog and Dear Evan Hansen?

For the last three or four years the sprawling, industrial-strength, woke-minded TIFF has occupied a third- or fourth-place standing among early fall festivals — the immaculate Venice and Telluride festivals tied for first, followed by the respected New York Film Festival with the frail or at least somewhat lessened TIFF bringing up the rear.

Nothing has really changed in that respect, even with the restrictions lifted and the belief (despite the spreading Delta variant) that the pandemic may be coming to an end. Toronto is an okay fest — it’s fine — but it ain’t what it used to be. It’s no longer a vital thing for people in the press as well many some distributors. Lively, perhaps even urgent but not vital. TIFF has become a “big”, semi-important, second-tier festival. 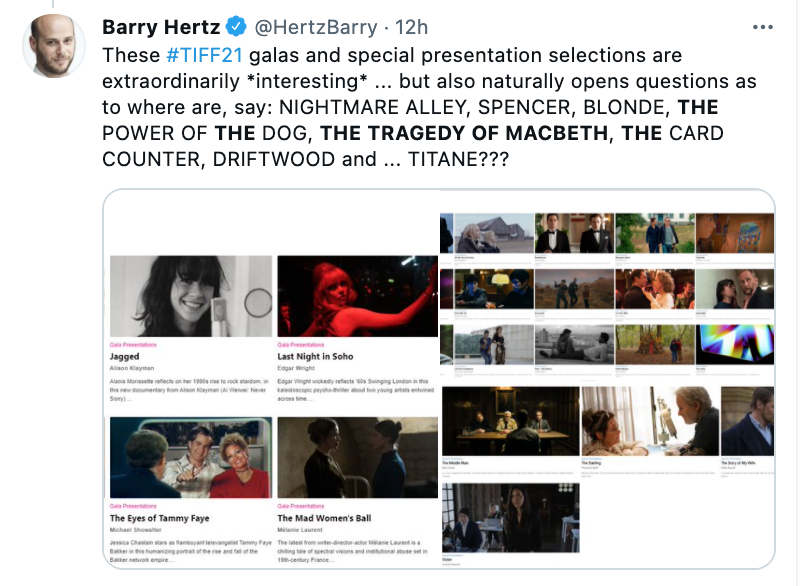 Is it safe to say that Clifford the Big Red Dog will win the TIFF People’s Choice Award?

So TIFF is Clifford the Red Dog, The Eyes of Tammy Faye, Phillip Noyce and Naomi Watts’ Canadian isolation film Lakewood, the North American premiere of Last Night in Soho plus Dear Evan Hansen, an IMAX presentation of Dune and not much else. More titles will be announced, but today was supposed to be a big hoo-hah day.

Here’s a partial copy of the Variety rundown (*previously announced) with HE reactions following some titles.

*Belfast, d: Kenneth Branagh | United Kingdom / World Premiere / HE: Directed and written by Branagh, who was raised in Belfast. Set in the ’60s, presumably focusing on “the troubles,” etc.

Dear Evan Hansen, d: Stephen Chbosky | USA / World Premiere / HE: “Is it me or does Dear Evan Hansen radiate an aura of extreme sensitivity and emotional vulnerability? It feels…what’s the term I’m searching for?…kinda snowflakey.”

Lakewood, d: Phillip Noyce / Synopsis: “A mother (Naomi Watts) desperately races against time to save her child as authorities place her small town on lockdown.” HE: Minimalist thriller, made by a master craftsman.