It’s 3:14 am and I’ve just finished reading the Wikipedia document about the late Gertrude Baniszewski, a.k.a. “the Torture Mother” — a hugely disturbed Indiana woman who instigated and organized the prolonged torture, mutilation and eventual murder of Sylvia Likens, a teenage girl she had taken into her home, in the early 1960s. 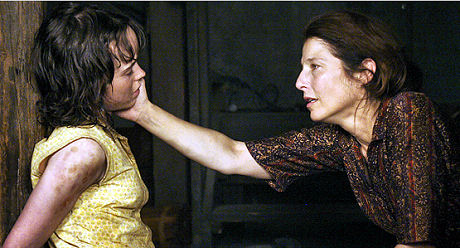 I read this history because of Pat Broeske‘s 1.14.07 N.Y. Times piece about a movie about Baniszewski’s beyond-ghastly deed — Tommy O’Haver‘s An American Crime, with Catherine Keener portraying Baniszewski.
O’Haver’s film is playing at the Sundance Film Festival (Eccles on Friday, 1.19, at 9:30 pm, and then at the Racquet Club the following morning at 8:30 am, followed by a third screening at the Sundance resort on Sunday), and I’m asking myself — it’s now 3:22 am — do I really want to see this film? Along with a second filmed drama about the Baniszewski case, Gregory Wilson‘s The Girl Next Door, which isn’t playing Sundance but, according to Broeske, has been submitted to the Tribeca Film Festival?
I’m trying to imagine how watching O’Haver’s version won’t feel like an endurance trial of some kind — a film you see at Sundance so you can say to yourself, “I’m not a dilletante…I grimmed up and got through it,” and then half-brag about this to others. This is the scenario, in any case, that Broeske’s article has put in my head.
A friend who’s seen An American Crime says “it is a bit of an endurance test at times, but it really doesn’t show anything that graphic… it’s more like Hard Candy where the ‘thought’ of something being done is more intense than actually seeing something. It’s worth seeing for the performances by Keener and Page, who are both amazing.”

The Wikipedia page says that while Baniszewski “played an active role in Likens’ death, the majority of the torture that eventually brought about Likens’ demise was carried out by Baniszewski’s teenage children and other neighborhood children. Although Baniszewski did instruct the children on several occasions, it was later discovered that they took a large degree of Likens’ torture into their own hands, in what would later be called a Lord of the Flies scenario come to life.
“When Baniszewski was convicted of first-degree murder in 1965, the case was called ‘the single worst crime perpetrated against an individual in Indiana’s history.'”
Years have passed since producer-manager Victoria Wisdom said in a Hollywood Reporter piece that “‘Sundance’ spelled backwards is depression.” But her words come back every so often.