Touch of the Real

For whatever reason I haven’t yet been able to make myself write my review of Brian Goodman’s What Doesn’t Kill You (opening today in NYC and LA), which I saw and liked immediately at last September’s Toronto Film Festival. Go figure. It’s a straight-up, character-driven, top-drawer Boston crime movie with hugely satisfying performances (Mark Ruffalo and Ethan Hawke playing the leads), dialogue that is fast and unforced and believably ragged, and a climate of seedy blue-collar realism that feels honest and planted each step of the way. 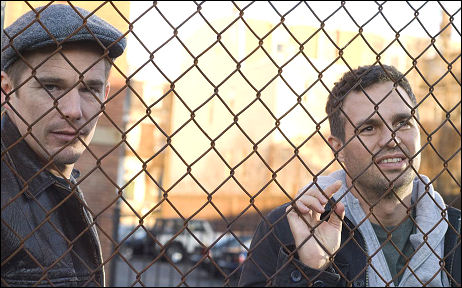 I’d write more if I had the time, but I have to be in town no later than 3 pm. So I’ve pasted most of Manohla Dargis ‘s N.Y. Times 12.12 review, which I agree with entirely.

“Fifty years ago What Doesn’t Kill You, a no-nonsense, few-frills crime drama about two losers hustling their way into an early grave, might have dropped into theaters, rattled its audiences and quietly slipped out, only to be rediscovered by later generations of insomniacs who spend their nights plugged in to Turner Classic Movies. This isn’t to say that the film, which was directed by Brian Goodman, is a classic in waiting, though neither is it trying to be. Rather it tells a good story well, and in the process quietly says a little something about what it means to look at the American dream from the bottom up.

“It opens with some chaotic bang-bang and a couple of guys with ski masks and guns trying to rob an armored truck. Whatever the take, it looks like penny-ante stuff, from the crummy getaway car to the generic mini-mall parking lot with its few random passers-by, one of whom turns out to be a cop with a gun. For reasons that become clear only later, one of the thieves, Paulie (Ethan Hawke), pulls off his mask and goes after the cop, walking into the line of fire and popping bullets before a freeze frame stops him in his tracks.

“The whole setup feels like a story you’ve seen a hundred times, a crucial difference being that there is something about this one that keeps you hooked.

“The image of a man walking into a blizzard of bullets is a grabber, but what keeps you tethered to this film is the low-key action, the no-exit rooms, the pitifully small stakes and the way Paulie slams a guy’s head against a bar with no ceremony, no mercy, no feeling. Along with his boyhood friend, Brian (Mark Ruffalo), Paulie works for a small-time gangster, Pat Kelly (Goodman), who runs the South Boston neighborhood where much of the story unfolds.

“Glorified errand boys, Paulie and Brian break heads and worse for Pat, who keeps them on a leash with meager wages and the threat of violence, which might not be bad for lowlifes if these two didn’t appear to be pushing 40.

“But they’re old for errand boys, too old, and it’s their jittery, mounting apprehension about being dead-ended in nowhere lives that helps separate the film from the usual generic chaff. Goodman, a character actor making a fine directing debut, apparently based the film on his own early life, and his performance as the pettiest of mob bosses is so unsympathetic, as if the character had been bled dry of goodness, that I can believe he has an inside track on this world. There’s a sense of intimacy with its lived-in houses and worn-out people that feels genuine, a touch of the real that extends to the accents, which for once in a South Boston film don’t sound like the achievement of a dialect coach.

“Goodman does stumble: one screeching showdown between Brian and his wife, Stacy (a strong Amanda Peet), sounds like a screenplay, not life. Brian’s spiral into addiction, however true, doesn’t escape the crack-den clich√É¬©s, and the ending, which literally spells out the true-life fates of the characters, is awkwardly managed. You may notice these flaws, but the desperation and grit and especially the actors keep you watching.

“His head shaved down to fuzz, skin stretched tight across his gaunt cheeks, Mr. Hawke holds you with a physically expressive performance that telegraphs each byroad of his character’s inner world. There is something haunted about Paulie that he makes true, so much so that it sometimes feels as if you’re looking past the character and into Mr. Hawke himself.

“Because Mr. Ruffalo approaches his roles like a character actor instead of a star — he slips into his films, doesn’t take ownership of them — it can be easy to take him for granted. We shouldn’t. Mr. Ruffalo is one of the greatest actors working in movies right now, and each performance is a gift.

“As he often does, he plays his character with such palpable sensitivity and empathy that you understand not just what Brian is going through at each moment but also the larger implications of these moments. Brian wants to do right by his wife and two young sons, to be a good and decent man, to keep his home and dignity. But he’s trapped in a world not of his making, in a life not fully of his design. His face is an open wound; his heart, too.”