It is axiomatic that a major dramatic film about any ethnic group is going to draw the ire of some p.c. group claiming to defend the cultural-political interests of said group, blah blah, because of a perceived tribal slur, blah blah. Not interesting! I can feel the slumber instinct building inside as I write this. Fight it! Fight it!

So it really means nothing that the Council on American-Islamic Relations recently complained that Alan Ball‘s Towelhead (which I saw and reviewed at last year’s Toronto Film Festival) is using a “racial and religious slur [that is] commonly used in a derogatory manner against people of the Muslim faith or Arab origin,” blah blah.
The movie is a good sit, though. Intriguing, different, a head-turner. Based on Alicia Eran‘s period novel of the same name, Towelhead (Warner Independent, 9.12 in New York and LA) is “a sturdy, complex character drama that’s 100% deserving of respect,” I wrote last year when it was called Nothing Is Private. “It’s obviously one of the most original, daring films about adolescent sexuality ever delivered by a quasi-mainstreamer. It’s also a sharp look at racism (and not just the American-bred kind) and a sobering portrait of the rifts and tensions between American and Middle-Eastern mindsets.
“And all of this out of a fairly simple period drama, set in a Houston suburb around the time of the Gulf War, about a 13 year-old half-Lebanese, half-Irish girl named Jasira (Summer Bishil), and what happens as she gradually decides, under the fiercely oppressive watch of her Lebanese dad (Peter Macdissi), to explore/ indulge her budding sexuality with two older guys — a randy but nice-enough African-American high schooler in his mid teens (Eugene Jones) and a sleazy neighborhood dad in his early 40s (Aaron Eckhart). 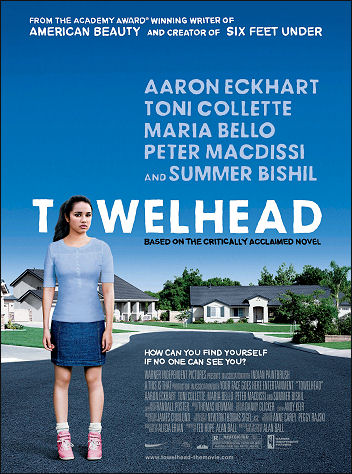 Towelhead “is not exploitation…not even a little bit. It’s a smartly written thing with all kinds of intrigues and counterweights built into each character, and an earnest residue of humanity seeping through at the finish.
“Even Eckhart’s character, scumbag that he is, has tics and shadings that make him more than just a thoughtless statutory rapist. Even Jasira’s dad, a dictatorial racist thug of the first order, comes off as somewhat sympathetic at times. And each one is his own way cares for Jasira. And despite the dark sexual currents (and as odd as this sound), it’s also a fairly amusing film. Really. It’s really boils down to being a ‘neighborhood folks and their quirks’ movie that…okay, is a little bit icky in two or three scenes but isn’t nearly as icky in a general sense as you might expect.”