I saw Michael Bay‘s Transformers (Dreamamount, 7.2) at 10 pm last night in that big spiffy theatre on the Paramount lot — the one with really superb sound and projection quality that was built in ’97 or thereabouts. Movies are always presented at their very best in this theatre. I was beaming start to finish as I watched a digitally-projected Zodiac there last March. So on a high-quality projection level at least, I was honestly looking forward to seeing Bay’s latest, even if it is about Mustangs and boom-boxes and helicopters turning into giant robots. 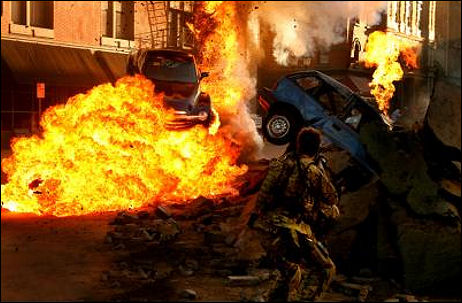 So it came as a surprise to realize that aside from the spectacular CG footage, Transformers doesn’t look all that good. The color has a rote, clammy, flatly-lit quality that suggests it was shot too fast to allow the dp to deliver anything more. If you’re into the pleasures of blue-chip action cinematography (my favorites include Paul Cameron‘s work in Gone in Sixty Seconds and David Tattersall‘s in Con Air), forget Transformers. It’s not in the least bit luscious or painterly or anything along these lines.
Bay obviously knows how to make films look first-rate, but he handed the dp reins to Mitchell Amundsen, who’d done nothing but second-unit action-flick photography before this. Obviously he wanted a guy who would just do as he was told.
The cutting style of Transformers is, for me, too fast and raggedy and fragmented to provide any kind of gripping-narrative effect. Even some of the standard insert shots (like an early one of President George Bush‘s red-socked feet) look inferior. There’s a lot of backstory and a lot to explain, but the film lurches and leaps from setting to setting at too breathless and spazzy a pace.
I know, I know…I’m not rolling with it because I’m not in my 20s and didn’t play with Transformer toys when I was a kid in the late ’80s or early ’90s, right? I used to buy the action figures for Jett and Dylan when they were five, six and seven years old. I’ve lived through it; I remember it well.
I quite liked the opening action scene (set in Qatar) in the beginning — it’s a lot of fun. Jett, who stayed all the way through the 140-whatever minute length, says the big Optimus Prime vs. Megatron showdown in downtown LA definitely kicks ass. This element alone will do it for the target audience. The theatre last night was filled with under-30s. I could tell they didn’t give a damn about anything as long as Bay was delivering the metallic bonks and thonks and heavy crunches. 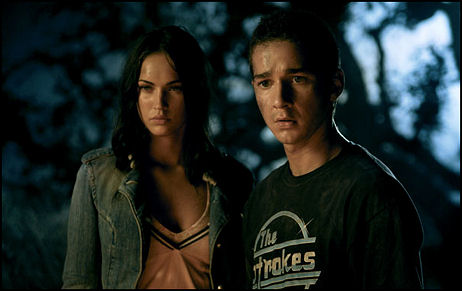 There’s some simple-dick dialogue in this thing that would choke a horse (including a couple of astoundingly stupid Optimus Prime lines about the internet and E-Bay), but who’s going to care aside from guys like myself?
I can’t talk about the performances (I could only feel sympathy for Shia LeBeouf, Josh Duhamel, Jon Voight, Anthony Edwards, etc.) or the theme or the plot particulars because it’s all chemically-treated milkshake crap flying in your face. The bottom line is that I can’t deal with an action movie that doesn’t at least look cool — cool between the CG spectacle shotts, I mean — and so I left the film in my head before I finally did the Big Bold Thing and walked out at the 90-minute mark.
Transformers is going to put big money in a lot of pockets, but Michael Bay is digging himself deeper and deeper into that Michael Bay hole that he needs to climb out of. Are you reading this, Bay-o? You’re obviously a very skilled guy and you’re having fun with the logistics and of course you’re getting rich, but you’re going to hate, hate, hate yourself by the time you’re 55 if you don’t start making movies with a semblance of a soul. Jacob Marley’s ghost said it to Ebenezer Scrooger — save yourself!
As I came out of the theatre producer Tom DeSanto was standing in the lobby. “Hey, Jeff!” he said aloud. I just waved and half-smiled and said “hey!” and kept walking. It was embarassing, but what was I going to say?