I can’t write about this until tomorrow, but the hype has turned out to be absolutely true — Stephen Walker‘s Young@Heart is the reigning heart movie of the LA. Film Festival (and in both senses of the term, delivering both warmth and sadness) and will be a guaranteed winner when it goes out commercially. 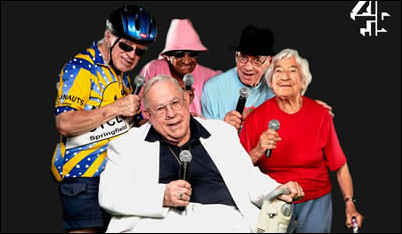 And sooner or later, trust me, it will do that. If it comes out later this year, it’s almost guaranteed to end up as one of the five nominees for Best Feature Documentary. I’m serious. It’s not a “great” documentary, but it touches you big-time.
I’m just going run John Anderson‘s Variety review for now (it went up last night), and put something up myself over the weekend.
“Viewers have seen a lot of rock ‘n’ rollers onstage carrying bottles, but they’re not usually full of oxygen,” John begins. “Of course, the average age of most rock groups isn’t 80, as it is for the subjects of Young@Heart, an irresistibly joyous, tearful and, most importantly, musical doc about a band of senior pop singers whose repertoire includes ‘Golden Years, ‘Should I Stay or Should I Go’ and ‘Stayin’ Alive.’ Theatrical odds may be long, but no one would exit this British TV production feeling they’d wasted their money.
“The narration, by director Stephen Walker, suggests an NPR feature, and the episodic structure is pretty pat — several members of the Young@Heart chorus are picked out for closer study during the six-week lead-up to their annual public performance. But the performers are all charmers, singing or just speaking their way through music by Radiohead, Jimi Hendrix, the Clash and James Brown.
“When asked, those performers admit a preference for classical music, but when they attack a song like the Ramones’ ‘I Wanna Be Sedated,’ they do so with passion. Gusto. They throw away their walkers.

“Where Young@Heart goes totally right is its inclusion of special music videos directed by the film’s producer, Sally George, which feature the aforementioned Ramones song as well as Talking Heads’ ‘Road to Nowhere.’ The very image of these aging headbangers in an MTV format is funny and melancholy — two members die during the final week before the big show, and membership is euphemistically said to be ‘in flux.’
“But their humor is so genuine and their enthusiasm so infectious, it would seem impossible for an aud not to be swept away — especially when, following the death of one member, the group sings ‘Forever Young’ at a prison near their base in Northhampton, Mass.
“The leader of the group is the much younger Bob Cilian, who’s a “taskmaster,” as one member puts it. Cilian gets frustrated during the weeks-long rehearsals of the Pointer Sisters’ ‘Yes We Can Can,’ the song’s 70-odd ‘cans’ confusing the group (and at least one viewer). Eventually, though, most of the kinks are worked out.
“Production values are fine, if not spectacular, but applying a high gloss to Young@Heart wouldn’t make sense, anyway.”