Danny Trejo‘s “My Life of Crime, Redemption, and Hollywood” became an immediate best-seller when it was published on 7.6. It’s currently 11th or 12th on the N.Y. Times list, and was at #3 for a short while. I gave some thought myself to buying the Kindle edition. I’ve always liked Trejo, and I still maintain that his best performance is in Michael Mann‘s Heat (’95)l

I’m presuming that the people who’ve bought the book are mainly Trejo fans…proles who personally relate to his hard-knocks saga and are sold on him as a real-deal sort of guy who’s led a rugged, dangerous life (especially during his tweener and teen years) but managed to save himself and gradually grew into a better person.

A week or so ago I read Lewis Beale‘s Daily Beast profile of Trejo and the book (“Is Danny Trejo the Most Lovably Terrifying Actor Ever?“). 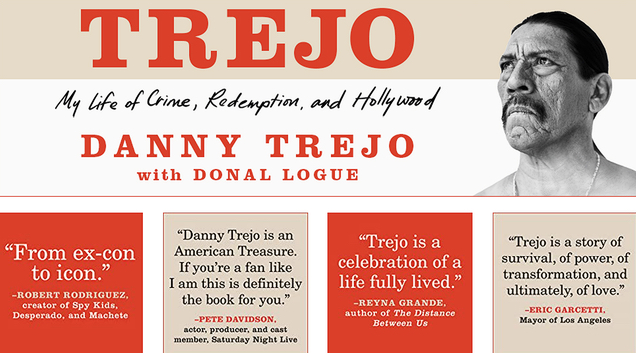 We all understand that most many actors aren’t necessarily gifted at writing, and that whenever they “author” a book it’s usually been tweaked and edited by a professional. In this case the co-author is actor Donal Logue, a longtime friend of Trejo’s.

In a chat with Beale, Logue reveals that Trejo didn’t sit down and try to write anything — not even a half-assed rough draft. He just spoke with Logue extensively, and then Logue did the heavy lifting…hah!

Beale: “The book itself actually got rolling thanks to Logue, whose literary agent suggested Trejo do a work about his life. So Logue wrote a proposal, and then spent two years interviewing his buddy and whipping the project into shape.

“‘He’s the most articulate guy I ever met,’ says Logue, ‘and he pretty much laid out the structure of the story. He has no problem speaking or being quoted, but packaging it, putting some structure to it, fell on my lap.'”

Logue and Trejo first met 22 years ago (i.e., 1999) at an AA meeting. At the time both were acting in Reindeer Games, the Ben Affleck-Charlize Theron film.

Having read the book, Beale offers a criticism about Trejo’s over-reliance on “recovery speak” — the presence of lines like “the magic of forgiveness is so profound, and it starts with us forgiving ourselves.”

Utterances of this sort “are scattered throughout the book,” Beale notes. “You can imagine thoughts like this being articulated at every AA meeting, but their greeting card sincerity can be a bit off-putting.”