I’m confused about the name of the brand-new Three Amigos production company — headed, of course, by Alfonso Cuaron, Guillermo del Toro and Alejandro Gonzales Inarritu — that has just cut a deal with Focus Features, Universal’s specialty division. Variety‘s story says the company is called Tres, but Indiewire’s story says it’s called cha cha cha. But right-click on the Indiewire portrait photo (which I stole for this story) you’ll see the codeword “tresTRIO,jpg.” 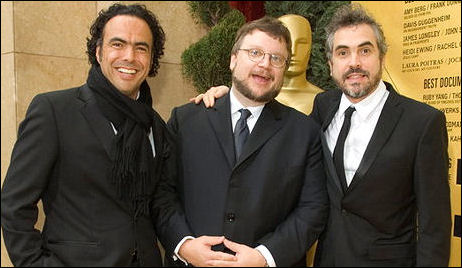 If any of the Three Amigos are reading this and would like a reaction, here’s mine. Please, please don’t call it cha cha cha, which sounds too bon vivant-ish. Tres is just perfect.
The deal says that Focus will finance and sell a package of five movies to be made by Cuaron, del Toro and Inarritu as well as one movie each from Carlos Cuaron and Rodrigo Garcia. Focus Int’d has reportedly has begin pre-sales in Cannes on the first of these films, Cuaron’s Rudo y Cursi, starring Gael Garcia Bernal and Diego Luna. Pic is in pre-production. The other four projects “have already been identified, but have yet to be announced.”