N.Y. Times media reporter David Carr and others have joked that the forthcoming merger of The Daily Beast and Newsweek should be called Newsbeast. But don’t laugh — the sound of it works. I’m actually a bit surprised that searches still aren’t finding any professional-looking Newsbeast logos. What else are they gonna call it? 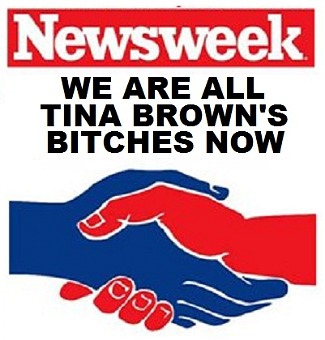 “Tina Brown‘s Daily Beast reportedly loses $10 million a year, and in 2009 Newsweek lost $28 million ,” the N.Y. Observer‘s Nick Summers (a former Newsweek staffer) writes in a just-posted article. “The premise that together the two will somehow make money has struck more than a few people as insane — but the bleeding may be more stoppable than people realize.”

It “may” be “more” stoppable? As opposed to less stoppable or comme ci comme ca stoppable? Somebody explain how “stopping the bleeding” = gradually profitable. Why is it that the financial algebra behind big-media deals like this one always sounds like mystifying gobbledygook?

“The print-ad market [is] coming back,” Summers explains early on. “Newsweek‘s name would add credibility as the Beast grew. And the world of magazine pages, Ms. Brown’s old stomping ground, beckon[s].” Newsweek as currently constituted (minus a recently departed “editor, int’l editor, the editor-at-large, a senior Washington correspondent, a diplomatic correspondent, the executive editor, two editorial directors, two deputy editors, the economics editor, an economics correspondent, two lead investigative reporters, the White House reporter, an international editor plus the website’s editor, general manager, managing editor and three articles editors”) is a shell of its former self. That was then, this is now, and Newsweek is for all intensive purposes a corpse with a “name.”

“Ms. Brown’s name brings in print-ad dollars all by itself,” Summers continues. “Newsweek‘s move from pricey West Village digs to [a] dodgy space at 7 Hanover Square will save $6.3 million in rent and operating costs alone. And there will be layoffs as the two staffs merge. (The incentive is to make those cuts from the Newsweek side of things, as the Washington Post Co. has agreed to cover some of those costs for up to one year.)

“Ms. Brown opposed the merger as late as last Tuesday morning. Three weeks prior, she appeared visibly relieved in the Beast newsroom when negotiations broke down, even reaching a level of Zen when it was clear she would not have to deal with the daunting logistics of a merger.

“Now she does. And she already works around the clock. The Observer asked: Where will she get the extra time?

“‘Well, my kids are grown up,’ Ms. Brown said softly. ‘And I’ve this theory that as you get older, you work harder.’ The absence of children creates a hole best filled by work, she said — ‘otherwise you’ll just feel mournful.’

“Ms. Brown, who gets tripped up a bit talking about the future of Newsweek.com, speaks calmly and clearly about her plans for the print magazine. She wants to be carefully organized and not rush into hiring. There will be no gaudy ‘first Tina’ issue. Things will improve gradually. ‘One is ready when one is ready,’ she said. ‘I know what it takes; I know what I’m able to do.’

“To speak with her about what to do with a magazine, even one so battered as Newsweek, is to believe in the magic of dead trees and ink.

“Oh my God. This is really going to happen.”