There’s a fascinating article in the August Vanity Fair (i.e., the Angelina Jolie cover) about the early days of professionally-supervised LSD therapy among the Hollywood elite, with samplers including Cary Grant, Sidney Lumet, Esther Williams and Betsy Drake, beginning in 1958. 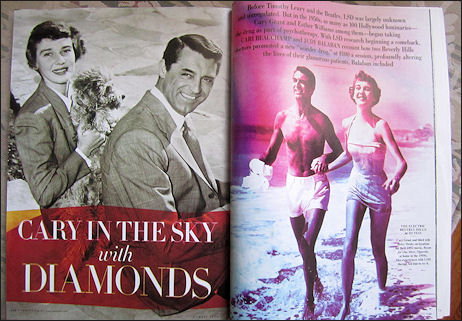 This was two or three years before the Harvard University LSD experiments with Timothy Leary and Richard Alpert, and seven years before various rock stars (including the Beatles) first began to drop, and nine or ten years before LSD began to catch on with adventurous middle-class youths in the cities and well-to-do suburbs.

It’s a carefully sculpted, touchingly written piece (particularly with quotes from the first-timers’ experiences, which in some cases were quite illuminating and even profound). The article doesn’t appear to be an excerpt from a book. The authors are Carl Beauchamp and Judy Balaban. Consider the opening four paragraphs:

“Our story is set in the years before Mad Men, when Eisenhower was in the White House and America had only 48 states. Our stage is Beverly Hills, still a small town in 1958, where movie stars and other entertainment-industry figures led active but traditional, even somewhat constrained social lives.

“There was a zone of privacy in that time and place we can’t begin to imagine today. Money, emotional traumas, and personal doubts were simply not discussed, even by the closest of friends. Appearances were accepted as reality, so people kept very busy making sure every aspect of their lives looked correct.

“That didn’t mean having the most lavish house, the heftiest jewels, or the largest private plane, as it came to in later decades. It did mean dressing, behaving and speaking appropriately; appearing to be happily married, in love, or looking for love en route to marriage; not complaining about one’s career or annual income; and being enormously ambitious without evidencing any ambition whatsover.

“Evenings were just as circumspect. Dinners were small A-list gatherings at Chasen’s, Romanoff’s, Don the Beachcomber, or poolside barbecues at private homes. The most visible scandals arose when dancing partners who were married — but not to each other — indulged in excessive caresses or when someone (almost always a man) drank too much, though boozy belligerence and even outright drunkenness were rare to invisible.

“Almost everyone smoked carton-loads of regular cigarettes, but a ‘joint’ was a body part of a lower-class dive. If people were ‘doing lines,’ you’d have guessed they were writing screenplay dialogue or song lyrics. And if you mentioned ‘acid,’ you’d mean citrus juice or a stomach problem.

“Nobody in Hollywood — or almost anywhere else in the United States — had ever heard of LSD, or lysergic acid diathylamide. Timothy Leary wouldn’t even pop his first mushroom until 1960. So it was very out of character that against this background a group of more than 100 Hollywood-establishment types began ingesting little azure pills that resembled cake decorations as an adjunct to psychotherapy.”