In a 5.17 interview with the N.Y Times Dave Itzkoff, Tonight Show host Jimmy Fallon addresses his playful mussing of Donald Trump‘s hair during a 9.16 telecast, which in my view is the worst thing Fallon has ever done and probably ever will do for the rest of his life.

Fallon “acknowledges now that the Trump interview was a setback, if not quite a mistake,” Itzkoff writes, “and he has absorbed at least a portion of the anger that was directed at him by critics and online detractors. ‘They have a right to be mad,’ a chastened Mr. Fallon said in an interview this month. ‘If I let anyone down, it hurt my feelings that they didn’t like it. I got it.'” 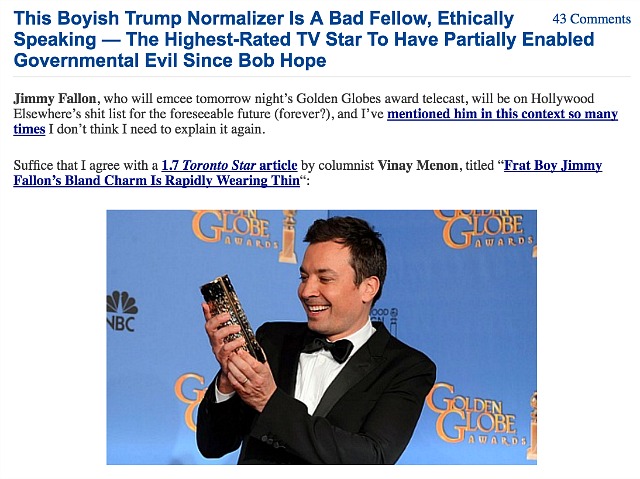 Improved Fallon quote: “Yeah, I fucked up. That episode told me that maybe from time to time I play things a little too light and goofy, and that maybe I should develop an alternate mode when certain guests are on and certain subjects come up.”

Posted here on 9.18.16: “Jimmy Fallon‘s talk-show brand is, to him, naturally, a prime consideration. That cheerful, easy, let’s-have-fun vibe. Play games, sing songs, fool around. Fallon will never challenge a guest with even a whiff of contentious political chatter.

“So when Orange Hitler came on, he had to keep that thing going. He presumably despises the fuck, but he had to maintain that Jimmy Fallon vibe. He had to lighten the mood and massage his head and make Trump seem to God knows how many millions like a somewhat more palatable guy than what the news media has been reporting and portraying.

“I’m back in Los Angeles now, and I’ve just watched the clip (the Toronto Film Festival pushed a lot of stuff aside) and it’s quite obvious that under the right circumstances and with the right guest, Jimmy Fallon is ready and willing to give evil a friendly back-pat. Jimmy has a popular show and a beaming alpha attitude, but…I don’t want to sound too rash here. I’m not saying he’s Joseph Goebbels or anyone in that realm, but…well, maybe I am. Because in his own way Fallon is not averse to boosting an agent of a potential apocalypse in terms of climate change, Supreme Court appointments, rank ignorance, 1%-favoring taxes, a shoot-from-the-hip foreign policy, etc.

“Which is a way of saying that in a roundabout, nice-guy way, there’s an aspect of Jimmy Fallon that reflects or…you know, summons associations with THE DEVIL.”

May 17, 2017by Jeffrey Wells18 Comments
« Previous post
Where The Heart Is
Next post »
Obama on Trump: “Nothing But A Bullshitter”