Trust What Ebbs and Flows?

“Trust love all the way” is the marketing slogan for Barry Jenkins‘ If Beale Street Could Talk (Annapurna, 12.14). I’m sorry but I regard that advice as a bill of goods.

Boil the snow out of Beale Street and the basic idea is this: Life is unfair and sometimes cruel, especially for POCs in ’70s Harlem and double-especially when a fraudulent rape charge lands poor young Fonny (Stephan James) in jail, leaving his pregnant young wife Tish (Kiki Layne) and their respective families (including Tish’s mom, played by Regina King) trying to somehow clear his name.

The basic drill is that justice is possible but too often unlikely, and in the end the thing that gets Fonny and Kiki through is love, as in (a) “black love is black wealth,” (b) “love is the fuel of survival, and (c) “despite the hardship and the fact that sometimes life sucks extra hard, love is the key to surviving the brutality of White America.” 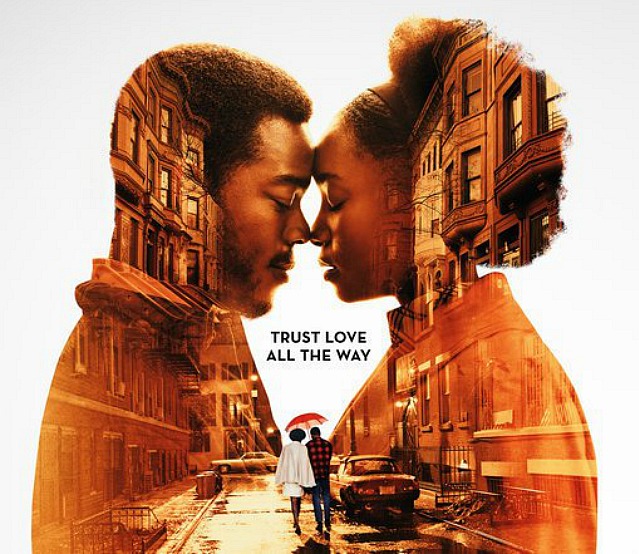 Satisfying movies always deliver a sense of justice at the end. The punishing of the guilty, the exoneration of the innocent, he/she gets what’s coming to him/her. Some sense of balance and fairness. “As you sow, so shall you reap” = Michael Corleone at the end of The Godfather, Part II or Zampano at the end of La Strada.

The bold strategy of If Beale Street Could Talk (which I fully respect) is to deny this payoff to Fonny, Tish and their families, and therefore to the audience. And at the same time it offers the “love will see you through if you really trust it” homily, which I regard as more of a bromide.

I’m in no way questioning the message or the metaphor in James Baldwin’s same-titled 1974 novel, and the meaning of Beale Street as a condition, a state of mind, the blues and the history of that, you can’t sing it if you haven’t felt it, black Americans trying to get by and pull through despite a sometimes wicked system.

But If Beale Street Could Talk is fundamentally unsatisfying because people we’ve come to know and care about are handed a shit sandwich at the end. (Or at the very least my idea of one.) Which is why when it slips out of the safety cocoon of industry screenings and award-season events and critical praise and whatnot, Beale Street is going to quietly die. Which sometimes happens with good films.

The bottom line is that people generally don’t pay to see a film in order to share in the eating of a shit sandwich.

I trust in love as far as it goes. If we’re talking husband-and-wife love or boyfriend-girlfriend love, we all know that’s almost never a matter of firm-hand-on-the-helm or rock-solid reliability. Well, sometimes it is but sometimes it takes a sabbatical. Love blooms and then levels off. It’s a bonfire or fading embers or somewhere in between. But if you keep throwing fresh logs on the fire, there’s a chance.

Life isn’t much without love, but at the end of the day, as John Lennon once said, the only thing you can trust in is yourself — your strengths, your good or bad luck, your spiritual journey, your discipline or lack of, your back yard, your capitulation or cowardice, your willingness to work hard and keep trying. That and your pets and the better members of your family. And your wife/girlfriend’s willingness to at least try and behave in a reasonably sane manner. And in my Jackery iPhone batteries.

My original If Beale Street Could Talk review, filed on 9.9.18.