There are two statements from Jennifer’s Body producer Jason Reitman in a 9.16 q & a with Dark Horizons‘ Paul Fischer that I find misleading, not credible, and pretty much astounding. 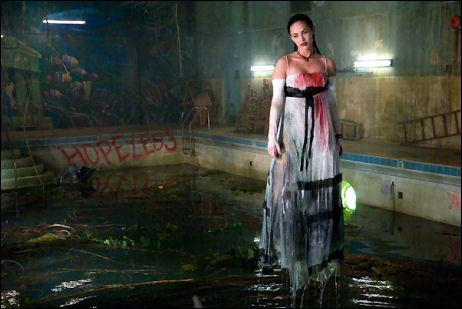 The first is Reitman referring to Jennifer’s Body as “nostalgic…it harkens to a movie from 20, 30 years ago, when horror films were warm, and they embraced you. Like Carrie [and] A Nightmare on Elm Street. I mean, you know, the movies I basically grew up on.” He could have also mentioned Heathers, which is what I was hoping Jennifer’s Body might be. But even from the most generous perspective it doesn’t begin to measure up to Michael Lehman‘s 1988 film, or to Wes Craven‘s or Brian De Palma‘s.

Jennifer’s Body is a stunningly primitive and grotesque programmer about supernatural boy-gutting carnage, and is brought even further down by Megan Fox‘s inability to do anything but radiate a coy and self-regarding porn-star shallowness.

It doesn’t begin to flirt with being any kind of high-school-sociology metaphor film like Heathers, or a horror film that adheres to the basics and makes any kind of primally satisfying sense like Nightmare, or one in which dazzling cinematic moves circumvent other shortcomings like Carrie. I understand Reitman being supportive of director Karyn Kusama, but this is flagrant smoke-blowing.

“It’s not necessarily right to judge a director from a moment when they’re down. And two, there’s actually an enormous benefit to getting someone right after something like that, when they really have something to say. I look at Karyn as the extraordinary storyteller behind Girlfight, a very personal storyteller. And when she came in and talked about this film, she got it. She understood the tone, the look, and most importantly, the relationship between these two young women.

“Which I think is one of the reasons why the film is so unique. That’s what Diablo Cody does best, at the end of the day. I think — you know, people, unfortunately, associate Diablo with very witty dialogue, when what she — her real gift is understanding complex human relationships and that’s something that Karyn appreciated most about the screenplay.”

That’s what he said, all right — “complex human relationships.” Here’s a repost of something I said a few days ago:

“Nine and a half years ago I flipped for Karyn Kusama’s Girlfight, one of the most street-authentic and emotionally believable female empowerment sports sagas ever. Last week I saw Kusama’s latest film, Jennifer’s Body, and I was aghast.

“Never in my life have I noticed such a massive disparity in the tone, spirit and content of two films by the same director. A talented young woman with guts and heart directed Girlfight. A woman who has sold her soul to Satan directed Jennifer’s Body. It is empty repellent extremist crap.”