Two Kids and a Cop

Okay, I agree that Jon Watts‘ Cop Car (Focus Word, 8.7) could be more inventively plotted. But the plot that Watts and cowriter Christopher Ford went with isn’t bad — it’s certainly servicable — and I therefore feel it’s really unfair to dismiss a film because the plot points aren’t as clever as they might have been if Watts had listened to this or that critic’s suggestions during early story meetings. They’re good enough, and besides Cop Car isn’t about would-be cleverness as much as high-end craft and sly, sardonic humor that you’ll either get or you won’t. 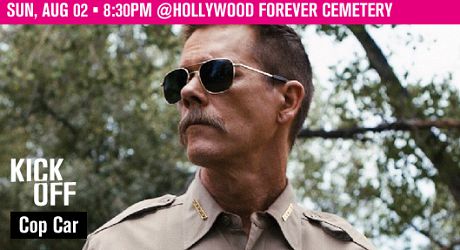 This is a highly sophisticated, almost-arthouse-level B movie. It’s a popcorn thing, but in a well-ordered, darkly amusing Coen Brothers way. Blood Simple-like. Okay, it’s Coen Brothers light, but good enough for me. It’ll be good enough for nearly everyone, trust me. Don’t listen to the cranky critics who have brought the Rotten Tomatoes average down to 72%.

The basic drill is about two young boys with semi-anarchic attitudes (James Freedson-Jackson, Hays Wellford) finding a seemingly abandoned cop car hidden in a semi-secluded glade amidst wide-open fields in rural Colorado. They eventually goad each other into taking the car for a wild-ass joyride, and then they enjoy some recreational highs with some weapons they’ve found in the back seat. Time of your life…huh, kid?

Little do they know that the car belongs to a dirty sheriff (Kevin Bacon) who just happened to be burying a dead drug dealer a half mile away when the kids happened upon the vehicle. Bacon eventually finds (i.e., steals) another vehicle and then discovers who’s taken his wheels and begins to figure how to locate the kids and get the car back, etc. But the kids have discovered a surprise in the trunk, and then…that’s as far as I’m going.

Yes, Cop Car is pulp but oh, the careful and exacting construction! It may not pay off thematically or metaphorically, but it’s much, much better than it sounds, and all because it’s been assembled like a fine Swiss watch. Either you get enjoyment from top-tier engineering or you don’t.

I saw it last night under the stars at a special Hollywood Forever screening, sponsored by the Sundance Institute and their Next Festival, which kicks off this Friday in downtown Los Angeles.