Before last night’s open-air screening of Cop Car at Hollywood Forever, I was strolling around and taking photos of various tombstones and whatnot. It was just past dusk (8:15ish) and everything was perfect — enough light for photos, settled-down vibe, the hot temperatures giving way to coolness, nice grassy aroma. I took shots of a statue/tomb of Johnny Ramone near a pond, and then I noticed a tribute stone to Hattie McDaniel and walked over for a shot. “Sir! Sir!” Some guy was telling me to stop but it felt like the better part of wisdom to ignore him. My big moment with Ms. McDaniel was five seconds away, and I wasn’t disturbing anyone. Leave me alone. “Sir!” It was a tall black security dude in his late 30s or early 40s, standing 15 or 20 feet away with a couple of ladies. “The park is closed, sir.” I changed tack and decided to forget the photo, but I really didn’t get it. The vibe was so cool and soothing before this guy got in the way. The screen area of cemetery was overflowing with people but his orders were to stop people from roaming past a certain pathway. Insurance concerns, he said. Idiocy. I decided to return some day soon and commune with some of the residents there — McDaniel, Peter Finch, Douglas Fairbanks, etc. I’m fairly sure that the Hugo Shields funeral scene in The Bad and the Beautiful was shot there. 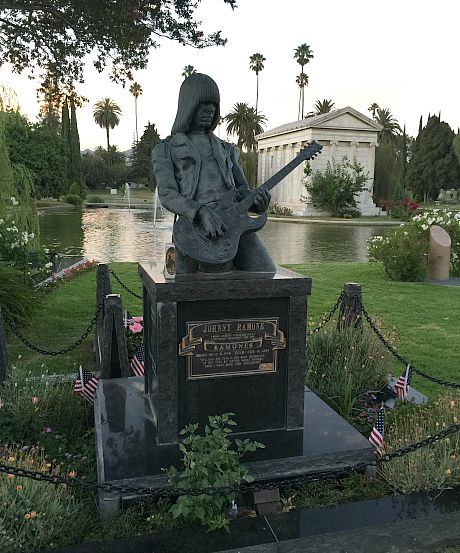 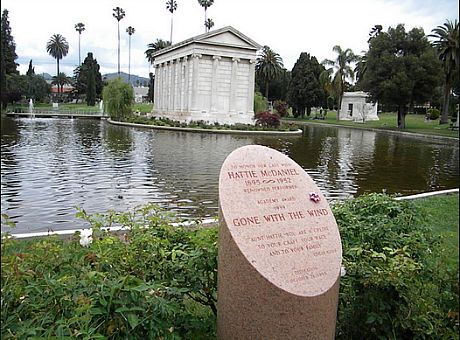 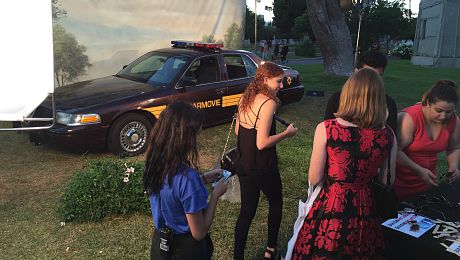