Two Sides of the Fence

New York‘s Vulture guys, assessing the so-far universal praise for Pixar’s WALL*E, are trying to kick-start a campaign to give it a “real” Best Picture Oscar next February instead of — in their minds — an allegedly downgraded substitute tribute in the form of a Best Animated Feature Oscar. 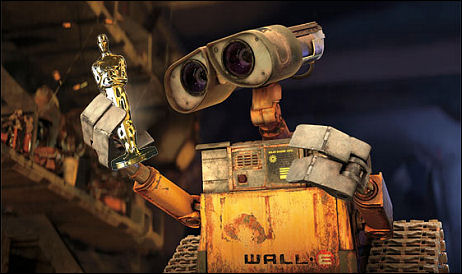 This is wrong, fellas. The animated realm means an emphasis on digital as opposed to organic raw-grain realism, and the Best Picture realm still means more or less the opposite. We’re obviously living in a world of increasing overlap between them — reality ain’t what it used to be — but distinctions must be recognized and the electric segregation fence must be respected and fortified. Question is, on which side of the fence is the grass greener in terms of creative possibility and realization? It’s debatable.
WALL*E is a glorious film, but there would be nothing the least bit diminishing if it takes the Best Animated Feature Oscar. It would be honorable and appropriate and a good thing all around. The Chicago Tribune‘s Michael Phillips has called WALL*E “the best science-fiction film so far this year, the best romance so far this year and the best American studio film so far this year.” True, but it doesn’t belong in the raw reality arena and its admirers (myself among them) know it.
“Could this be the year that the Academy finally realizes that Pixar movies are the closest Hollywood comes anymore to the great, classy populist entertainments that used to be nominated for a gazillion Oscars?,” the “Vulutre” piece says, “the kinds of movies that everyone complains have disappeared from the Academy Awards?”
That’s a largely true statement, I feel, but WALL*E is, I feel, an exception to the animation realm. The Pixar economy, invention and poetry bestow an unusual profoundity and a universal appeal, but it’s still — get real for a second — fundamentally made for and aimed at families, kids, X-factor moviegoers and film critics. And it uses a certain kind of paint and paint-brushes that are specifically intended to stir the imagination and summon metaphor.
In a certain way, WALL*E obviously reflects and recreates the world that we’ve built, that has been given to us, that we’re stuck in for better or worse. But only in that way. It’s fundamentally (and to its enormous credit) a dreamscape movie, and creating in that world requires a very specific discipline and sensibility that doesn’t vote, doesn’t pay bills, doesn’t enjoy the string and the brass on Miklos Roza‘s El Cid soundtrack, doesn’t drink good Pinot Grigio at parties, doesn’t pay $4.40 for a gallon of gas, doesn’t buy sour cream-and-onion potato chips at a 7-11 at 11:45 pm and doesn’t recoil from the lack of hygiene at a gas-station restroom.
There is an enormous high and an unfettered dignity that comes from simply aiming a camera at real people and real locations and making it all sing. Every now and then it happens. We all know there’s magic on the animation side of the fence, but the people who work it need to invest in their own land, sing their own songs, beat their own drums, wave their own flag and stay the fuck out of Reality Nation.